My Real Name Is Hanna
by Tara Lynn Masih

Hanna Slivka is on the cusp of fourteen when Hitler’s army crosses the border into Soviet-occupied Ukraine. Soon, the Gestapo closes in, determined to make the shtetele she lives in “free of Jews.” Until the German occupation, Hanna spent her time exploring Kwasova with her younger siblings, admiring the drawings of the handsome Leon Stadnick, and helping her neighbor dye decorative pysanky eggs. But now she, Leon, and their families are forced to flee and hide in the forest outside their shtetele—and then in the dark caves beneath the rolling meadows, rumored to harbor evil spirits. Underground, they battle sickness and starvation, while the hunt continues above. When Hanna’s father disappears, suddenly it’s up to Hanna to find him—and to find a way to keep the rest of her family, and friends, alive.

Sparse, resonant, and lyrical, weaving in tales of Jewish and Ukrainian folklore, My Real Name Is Hanna celebrates the sustaining bonds of family, the beauty of a helping hand, and the tenacity of the human spirit.

I don’t know where to begin with this book. Hanna will stay close to my heart for a long time to come. My Real Name Is Hanna explores one of the darkest times in history, but does so with a remarkable spirit of hope and faith in mankind. Central to the theme of this book is a sense of connection which transcends divides such as religious beliefs.

One of the most touching relationships in this book is between our young Jewish protagonist, Hanna, and her elderly Christian neighbor, Alla, who takes on a somewhat grandmotherly role to Hanna. Hanna’s parents don’t entirely approve of the work which she does for Alla, assisting her in decorating pysanky, a kind of Ukrainian Easter egg which is intricately decorated and rich with symbolism. At one point in the story, Alla gifts Hanna with a pysanka decorated with symbols from Jewish folklore, a gesture which speaks to a deep abiding love and the mutual respect they have for one another’s cultures and beliefs.

Hanna’s father examines the bird painted on the egg and speculates on the meaning behind it. Perhaps it is a phoenix, which would symbolize patience, or perhaps it is the Ziz, which would be a symbol of protection. 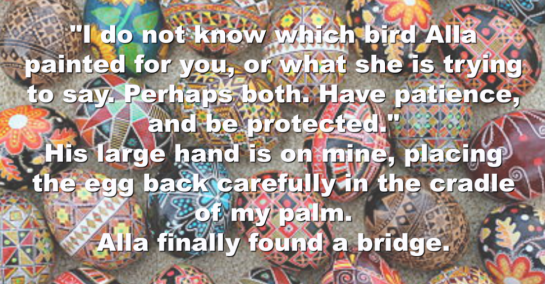 This passage is, in a lot of ways, the crux of the novel to me. Alla and Hanna connect, not by ignoring their differences, but by embracing them, finding ways to bridge the gap, and a mutual habit of never addressing one another with a sense of superiority. This merging of cultural traditions in a time of sharp division and iniquity was a poignant symbol of hope in the fundamental goodness of people.

There is a lot of darkness in this book; it is a YA book, so it avoids going into grisly detail about some of the worst of Nazi atrocities, but it is honest and clear about the fact that Hannah and her family are facing the imminent threat of death. They endure unspeakable hardship, sustained in large part by their love for one another. They have lost their home, almost all of their possessions, and any sense of security in their own country, but familial love endures as they hold on by a thread.

Inspired by a true story of a family that survived the Holocaust by hiding out underground, this novel is a timely reminder of all that’s at stake when we fail to acknowledge the humanity of the Other. Above all else, we must value kindness and connection.

I received an ARC of this book in exchange for my honest review.

8 thoughts on “ARC Review – My Real Name Is Hanna, by Tara Lynn Masih”