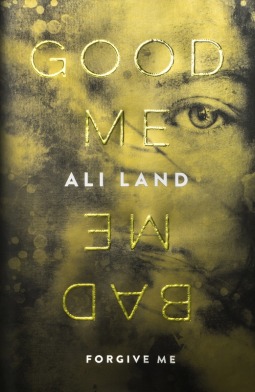 Good Me, Bad Me
by Ali Land

How far does the apple really fall from the tree?

Milly’s mother is a serial killer. Though Milly loves her mother, the only way to make her stop is to turn her in to the police. Milly is given a fresh start: a new identity, a home with an affluent foster family, and a spot at an exclusive private school.

When tensions rise and Milly feels trapped by her shiny new life, she has to decide: Will she be good? Or is she bad? She is, after all, her mother’s daughter.

Good Me, Bad Me hinges on Milly’s lingering guilt over her mother’s actions and the nature/nurture question: is Milly, bound to her serial killer mother through genetics and also environment, destined to become just like her? The book opens shortly after Milly has turned her mother into the police. She is living with her foster father / psychologist and preparing for the upcoming trial against her mother.

The brain of a psychopath is different from most, I’ve weighed up my chances. Eighty per cent genetics, twenty per cent environment. Me. One hundred per cent fucked.

I really liked the narration style; the story is told in first person from Milly’s point of view and the sometimes disjointed sentence structure does a good job of relaying her mental state. Every flash of anger or dark thought causes ripples in Milly’s psyche: is this the beginning of becoming like Her?

As the main character, Milly was obviously the most developed, but some of the secondary characters felt lacking and one-dimensional. Her foster father is nurturing, her foster mother is in a constant drugged-up fog, and her foster sister is a bully. Her real mother, whose running commentary is constantly in Milly’s thoughts, takes on the air of a venomous spider looming overhead in a web. Perhaps the one-dimensional portrayal of everyone around her was an intentional writing choice meant to reflect Milly’s self absorption and shallow understanding of other people, but in any case, it felt like the novel suffered for it a bit.

The mother, dubbed the Peter Pan Killer by the media for her fondness of killing little boys, was sufficiently creepy despite being on the sidelines throughout the book. Milly’s memories of her mother’s “life lessons” are more than enough to paint her as a villain. Speaking of the mother, a novel about a serial killer who tortures and kills children could have easily felt overly sordid and tasteless. Land never goes into detail about what was done to each of the children, however, relying instead on implanting the mother’s voice into Milly’s head, encouraging her to manipulate and hurt, to make the reader squirm.

Being inside Milly’s head and watching her struggle to find a moral compass after years of abuse at the hands of a monster and her conflicted feelings about the mother she still loves on some level made for a really engaging read. While I found the narrative somewhat lacking and a little too predictable, Milly herself was intensely interesting.

Have you read Good Me, Bad Me? Please share your thoughts in the comments!
What’s your favorite psychological thriller?