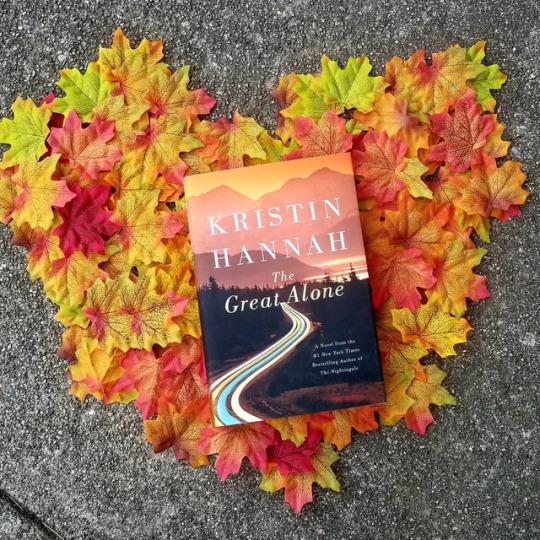 The Great Alone
by Kristin Hannah

Alaska, 1974.
Unpredictable. Unforgiving. Untamed.
For a family in crisis, the ultimate test of survival.

Ernt Allbright, a former POW, comes home from the Vietnam war a changed and volatile man. When he loses yet another job, he makes an impulsive decision: he will move his family north, to Alaska, where they will live off the grid in America’s last true frontier.

Thirteen-year-old Leni, a girl coming of age in a tumultuous time, caught in the riptide of her parents’ passionate, stormy relationship, dares to hope that a new land will lead to a better future for her family. She is desperate for a place to belong. Her mother, Cora, will do anything and go anywhere for the man she loves, even if it means following him into the unknown

At first, Alaska seems to be the answer to their prayers. In a wild, remote corner of the state, they find a fiercely independent community of strong men and even stronger women. The long, sunlit days and the generosity of the locals make up for the Allbrights’ lack of preparation and dwindling resources.

But as winter approaches and darkness descends on Alaska, Ernt’s fragile mental state deteriorates and the family begins to fracture. Soon the perils outside pale in comparison to threats from within. In their small cabin, covered in snow, blanketed in eighteen hours of night, Leni and her mother learn the terrible truth: they are on their own. In the wild, there is no one to save them but themselves.

In this unforgettable portrait of human frailty and resilience, Kristin Hannah reveals the indomitable character of the modern American pioneer and the spirit of a vanishing Alaska―a place of incomparable beauty and danger. The Great Alone is a daring, beautiful, stay-up-all-night story about love and loss, the fight for survival, and the wildness that lives in both man and nature.

The Great Alone is, at its heart, a story about love: the love between a mother and child, the toxic, one-sided love in an abusive relationship, love between friends, love of a place that becomes home, and the dizzying sensation of falling in love for the first time.

Books are the mile markers of my life. Some people have family photos or home movies to record their past. I’ve got books. Characters. For as long as I can remember, books have been my safe place.

Leni has a very difficult time growing up, mainly due to the abuse her mother suffers from her father. Leni’s father is a Vietnam veteran, and while her mother likes to blame his violence exclusively on his PTSD, there are hints he was never a great person from the beginning. Regardless, this toxic relationship looms large throughout the narrative, and as Leni grows up she struggles with her understanding of love. Hannah does an excellent job of portraying the ambivalence towards romantic relationships which can come from an upbringing like Leni’s.

The novel is also deliciously atmospheric; Alaska begins to feel like its own character at times, beautiful, but harsh and unforgiving. Leni’s deep affinity for the Alaskan wilderness shines through in all of the descriptions, even when she is recounting the dangers of the Alaskan winter. The harshness of the wilderness molds her from a vulnerable young girl to a strong, capable woman.

The Great Alone sometimes feels like an ominous, ticking time-bomb. The dangers of Alaska and Leni’s volatile father combine to create a creeping sense of dread leading up to the climax of the novel. From very early on, it becomes apparent something awful is going to happen before the end, but the disaster could come from so many different directions that it’s impossible to feel complacent during any scene. This novel kept me on the edge of my seat for over 400 pages, which is no easy task. I definitely recommend giving this one a shot!

Were you ever out in the Great Alone, when the moon was awful clear,
And the icy mountains hemmed you in with a silence you most could hear;
With only the howl of a timber wolf, and you camped there in the cold,
A half-dead thing in a stark, dead world, clean mad for the muck called gold.

Thank you for reading! Have you read The Great Alone? What were your thoughts? Have you read any novels that you felt handled the topic of abuse really effectively?
Discuss in the comments!

9 thoughts on “Review – The Great Alone, by Kristin Hannah”