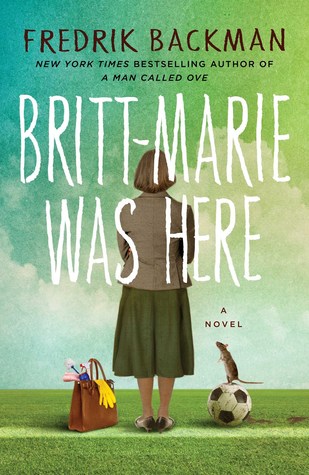 Britt-Marie Was Here
by Fredrik Backman

Britt-Marie can’t stand mess. A disorganized cutlery drawer ranks high on her list of unforgivable sins. She is not one to judge others—no matter how ill-mannered, unkempt, or morally suspect they might be. It’s just that sometimes people interpret her helpful suggestions as criticisms, which is certainly not her intention. But hidden inside the socially awkward, fussy busybody is a woman who has more imagination, bigger dreams, and a warmer heart that anyone around her realizes.

When Britt-Marie walks out on her cheating husband and has to fend for herself in the miserable backwater town of Borg—of which the kindest thing one can say is that it has a road going through it—she finds work as the caretaker of a soon-to-be demolished recreation center. The fastidious Britt-Marie soon finds herself being drawn into the daily doings of her fellow citizens, an odd assortment of miscreants, drunkards, layabouts. Most alarming of all, she’s given the impossible task of leading the supremely untalented children’s soccer team to victory. In this small town of misfits, can Britt-Marie find a place where she truly belongs?

“One morning you wake up with more life behind you than in front of you, not being able to understand how it’s happened.”

Britt-Marie Was Here was my second book my Fredrik Backman, the first being the wildly successful A Man Called Ove. I was a bit surprised by the striking similarities in themes between the two books, even considering that they both come from the same author. Ove and Britt-Marie are both older protagonists struggling to cope with a fundamental sense of loneliness for the first time in their adult lives. They are both uptight curmudgeons who find love and meaning in places they didn’t expect, finding themselves fundamentally changed in the process.

That being said, Britt-Marie Was Here is very much its own story. Britt-Marie is not dealing with the death of a spouse, but with the dawning realization that she is not being treated the way she deserves. After years of marriage, after devoting the bulk of one’s adult life to a partner, what a terrifying prospect: it’s all been all wrong. Fundamentally, irreparably, wrong. Britt-Marie packs a suitcase, leaves the home she’s shared with her husband, and sets out to find a job after spending her life as a homemaker. This brings her to Borg.

Britt-Marie obtains a position as a caretaker of the rec center, where she meets a colorful cast of characters who have more to teach her than she could possibly guess. The most important lesson she must learn is this: it is never too late. It’s never too late to turn around a football match, to make new friends, to visit the city you’ve always wanted to see… to stand up for yourself and realize that a spouse who doesn’t value you doesn’t deserve you. Britt-Marie’s story is told with the charming blend of humor and poignancy which made Backman’s A Man Called Ove such a success.

Britt-Marie Was Here is perfect for fans of…

A human being, any human being at all, has so perishingly few chances to stay right there, to let go of time and fall into the moment. And to love someone without measure, explode with passion… A few times when we are children, maybe, for those of us who are allowed to be… But after that? How many breaths are we allowed to take beyond the confines of ourselves? How many pure emotions make us cheer out loud without a sense of shame? How many chances do we get to be blessed by amnesia? All passion is childish, it’s banal and naive, it’s nothing we learn, it’s instinctive, and so it overwhelms us… Overturns us… It bears us away in a flood… All other emotions belong to the earth, but passion inhabits the universe. That is the reason why passion is worth something. Not for what it gives us, but for what it demands that we risk – our dignity, the puzzlement of others in their condescending shaking heads…

Thank you for reading! Have you read any of Backman’s work? Please share your thoughts in the comments!

7 thoughts on “Review – Britt-Marie Was Here, by Fredrik Backman”