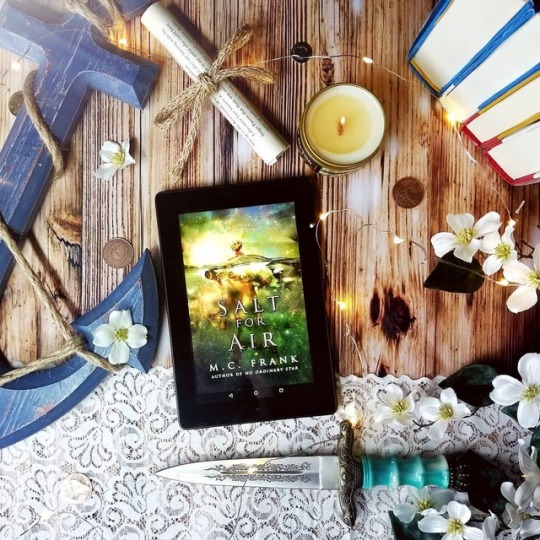 Greek mythology meets The Little Mermaid in this delicious fantasy novel about a quiet, nerdy girl who meets a mer prince in her bathroom. Perfect for fans of The Heroes of Olympus and the Lux series.

Seventeen-year-old Ellie dreams of mermen. She writes fanfiction about them and spends time in underwater kingdoms in her imagination, trying to escape the sad reality: she is an orphan. And not only that, but she’s bullied every day at school -she’s a nerd, she hates sports, she loves books and she used to be overweight. What’s not to bully?

One day, the bullies go too far. They try to drown her, but at the last minute an otherworldly creature shows up in the water. He keeps her breathing and tells her to live: “How will you be able to save anyone if you can’t even save yourself?”

She thinks it was a dream, but the emerald-eyed merman boy who rescued her appears in her school the next day. Is he really the exiled prince of an ancient kingdom that’s on the brink of utter destruction? And is he asking her to save him? Or is something far more sinister and deadly lurking in the water that surrounds her little Greek town?

When myth and reality collide, can love save their lives?

My thanks to the author, M. C. Frank for sending me an ARC of this book in exchange for an honest review. All opinions are my own.

Writing negative reviews for indie authors is painful. I truly went into this book with an open mind; I read a sample of the first few chapters before receiving an ARC, and I thought the story had a lot of promise. Ellie, the protagonist is a really sympathetic character. She’s somewhat of an outsider at school and is mourning the death of her father when the story opens. She uses fandom as a means of mental escape, and spends most of her free time writing fanfiction. Ellie was overweight before the start of the story, and the other kids at school gave her an extremely hard time about it.

But now that I’m no longer overweight, here’s what I found out:
1. I don’t care. I don’t care what those people thought or what they called me. There are so many other things to care about. Good things, worthy things. Serious things. And small-minded, cruel people are none of these.
2. I hate how I got skinny. I hate that I lost the weight by forgetting to eat between hospital visits, and then not being able to eat because he wasn’t there. He still isn’t. He never will be. So what’s the point in being anything at all?
3. They’re still making fun of me.

I think this was a strong point of the novel; Frank has run with the anti-bullying theme in a big way, and while it can sometimes get heavy-handed, it’s a really good overall message. Bullies are rarely portrayed in anything other than an explicitly negative light in fiction, but Frank takes it a step further by making it a point to place the focus on Ellie in a very particular way. The trait that had apparently triggered the bullying in the first place no longer exists, but the bullying continues. The underlying message here is clear: kids can be habitually harassed for no particular reason. The bullies may latch onto a particular kid because they seem insecure, and any particular trait that they use to belittle them may be purely incidental. Ellie was the bullied fat kid who lost all the weight, and it didn’t make any difference. She was targeted simply because she was vulnerable.

However, as the story progresses, it doesn’t feel like any meaningful character development happens. When the supernatural aspect of the story becomes apparent, Ellie never seems to progress beyond the stage of constant bewilderment. Usually in stories where the main character is thrown into a supernatural narrative, they hit a certain point where they are no longer shocked by each new magical revelation. They accept whatever paranormal reality exists in the novel and they roll with it. Ellie never hits that point. She is either distraught over the loss of her father or in a state of “OMG, is this really happening?!? I think this might actually be happening!” Those are her two main mental states, punctuated occasionally by thirsting after Ky, the merman.

And speaking of Ky, this is where the story really lost me. I have a big issue with YA romances that feature a cocky, self-centered boy with an insecure, isolated girl. Why is this such a trope? Frank attempts to make Ky sympathetic by emphasizing the danger he’s faced his whole life and by giving him occasional moments where he is fiercely protective of Ellie, but the overall impression I got of him was still quite negative. Ellie dislikes everything about him other than his appearance early in the book, and while she ends up falling for him seemingly overnight, Frank does not succeed in making the reader do the same. Ky is being hunted by the villains of the story, but I was never given a compelling reason to hate or fear those villains or to root for Ky’s survival. Consequently, the story lacked the tension it was aiming to create.

Spoilers for the following section.

One of my biggest problems with this novel comes late in the story. Ellie and Ky have fallen in love, and Ky must return to his own world to be their king. There is a war going on, and he will not be able to return to Ellie’s world. She must go with him or never see him again. Ellie has no living close family members. She feels like a burden to the people she lives with, and she has no friends at all. She has been unspeakably depressed for quite some time. In short, she has no compelling reason to want to stay in her own world as opposed to going with Ky. There is an attempt to make this seem like a difficult choice; there is no death in Ky’s world, and Ellie is concerned about going there and giving up the possibility of being reunited with her father in the afterlife. Even this reasoning kind of falls flat, however. Ky would be unable to come back to our world because he is a leader in a high-stakes war; Ellie does not have a similar reason that would make her decision to go to Ky’s world necessarily permanent. Ellie seems to look at this as an irrevocable decision, but nothing in the narrative itself seems to designate it as such.

All that being said, the build-up in the story which causes the reader to view this as a choice Ellie needs to make (and perhaps an opportunity for some much needed character development) is all a fake-out. Ellie never gets to make this decision for herself. She is injured badly and unlikely to survive unless Ky takes her to his world, where his magic will allow him to heal her in ways he cannot in her own world. Ky decides to take her rather than let her die. Once there, Ellie doesn’t even seem to have any complicated feelings about the fact that such a monumental decision has been taken from her.

All that being said, there is a definite audience for this book; it just wasn’t me. Fans of the Shadowhunters series or Twilight might have a hard time putting this one down.

Salt for Air can be purchased through Amazon.