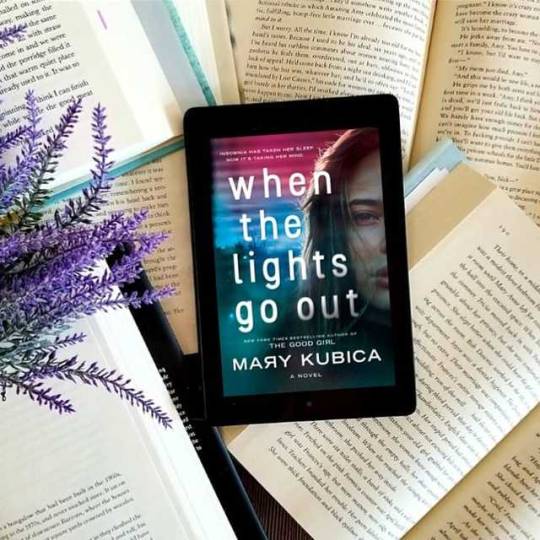 When the Lights Go Out
by Mary Kubica

A woman is forced to question her own identity in this riveting and emotionally charged thriller by the blockbuster bestselling author of The Good Girl, Mary Kubica

Jessie Sloane is on the path to rebuilding her life after years of caring for her ailing mother. She rents a new apartment and applies for college. But when the college informs her that her social security number has raised a red flag, Jessie discovers a shocking detail that causes her to doubt everything she’s ever known.

Finding herself suddenly at the center of a bizarre mystery, Jessie tumbles down a rabbit hole, which is only exacerbated by grief and a relentless lack of sleep. As days pass and the insomnia worsens, it plays with Jessie’s mind. Her judgment is blurred, her thoughts are hampered by fatigue. Jessie begins to see things until she can no longer tell the difference between what’s real and what she’s only imagined.

Meanwhile, twenty years earlier and two hundred and fifty miles away, another woman’s split-second decision may hold the key to Jessie’s secret past. Has Jessie’s whole life been a lie or have her delusions gotten the best of her?

I don’t know why I keep trying to read Mary Kubica. I’ve felt very lukewarm towards her previous books which I’ve read, and When the Lights Go Out fell especially flat for me.

One of my biggest issues with her is that her writing simply feels stylistically off, with very clunky and sometimes redundant prose. One such example was this sentence: “We talked about private things, non-public things, things we weren’t apt to tell the rest of the world.” I’m sure the repetition was intended for emphasis, but it reads like a high school student fumbling to hit the word count requirement on a particularly tedious assignment. I honestly don’t know how an editor read that sentence and then went, “Yep, sounds good to me.”

That being said, the basic concept sounded like it had a lot of promise. The protagonist, Jessie, has just lost her mother to cancer. She is struggling with insomnia and slowly losing touch with reality due to the stress and lack of sleep. When her social security number is flagged as belonging to a dead girl in the process of applying to college, Jessie is forced to question everything she thought she knew about her life with her mother. Was she really her mother at all?

So we have the setup for a potentially interesting mystery (although perhaps a bit overdone; I already read The Face on the Milk Carton back in the ’90s, after all) but with a bit of a twist because the protagonist is an unreliable narrator due to her deteriorating mental state. We are also treated to flashbacks from the mother’s perspective which slowly lead up to how she ended up with Jessie. Okay, you have my attention.

If you’ve read any reviews of this book, you probably already know that it has a twist ending and that people have… mixed feelings about it. A lot of people disliked it because they felt like they’d had the rug pulled out from under them with no warning. I disagree with that assessment. There was a lot of foreshadowing peppered in throughout the book, but it could be disregarded as a product of Jessie’s insomnia, so it was easy to miss where it was actually going. Personally, I guessed where it was all leading, but held out hope that I was wrong, because the twist is simply infuriating, cliche, and cheap. I won’t spoil it here, but I will say that it left me (and a lot of other readers) feeling like I’d wasted a lot of time on this novel.

Suffice it to say that I think this will be my last Kubica novel.

Thank you for reading! Have you read When the Lights Go Out? Please share your thoughts in the comments.
Have you ever read a twist ending that left you feeling cheated? Let’s discuss.

9 thoughts on “Review – When the Lights Go Out, by Mary Kubica”