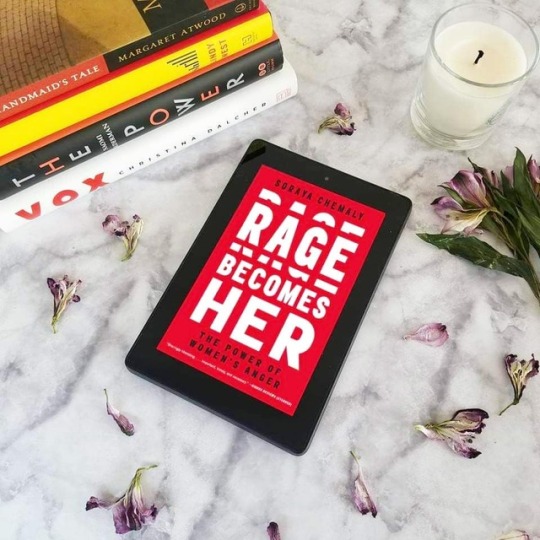 Rage Becomes Her
by Soraya Chemaly

A transformative book urging twenty-first century-women to embrace their anger and harness it as a tool for lasting personal and societal change.

Women are angry, and it isn’t hard to figure out why.

We are underpaid and overworked. Too sensitive, or not sensitive enough. Too dowdy or too made-up. Too big or too thin. Sluts or prudes. We are harassed, told we are asking for it, and asked if it would kill us to smile. Yes, yes it would.

Contrary to the rhetoric of popular “self-help” and an entire lifetime of being told otherwise, our rage is one of the most important resources we have, our sharpest tool against both personal and political oppression. We’ve been told for so long to bottle up our anger, letting it corrode our bodies and minds in ways we don’t even realize. Yet our anger is a vital instrument, our radar for injustice and a catalyst for change. On the flip side, the societal and cultural belittlement of our anger is a cunning way of limiting and controlling our power.

We are so often told to resist our rage or punished for justifiably expressing it, yet how many remarkable achievements in this world would never have gotten off the ground without the kernel of anger that fueled them? Rage Becomes Her makes the case that anger is not what gets in our way, it is our way, sparking a new understanding of one of our core emotions that will give women a liberating sense of why their anger matters and connect them to an entire universe of women no longer interested in making nice at all costs.

Following in the footsteps of classic feminist manifestos like The Feminine Mystique and Our Bodies, Ourselves, Rage Becomes Her is an eye-opening book for the twenty-first century woman: an engaging, accessible credo offering us the tools to re-understand our anger and harness its power to create lasting positive change.

“In my experience, it is difficult for many adults to accept that boys can and should control themselves and meet the same behavioral standards that we expect from girls. It’s even harder to accept that girls feel angry and have legitimate rights not to make themselves cheerfully available as resources for boys’ development.”

Rage Becomes Her is a timely and extensive exploration of women’s anger. Chemaly discusses varying aspects of this topic, from the differences in the expectations we set for male and female children, to the ways race intersects with gender to set our expectations. (For example, angry black girl stereotypes vs. the image of Asian women as inherently submissive.) There is a clear effort to make the topic intersectional and to show respect for the varying backgrounds and experiences of women.

While Chemaly is definitely making arguments and sharing her own opinions throughout the essays, the book is also brimming with facts. It’s evident that the work was very well researched and the author frequently cites studies to support her points.

Chemaly doesn’t make the argument that the sexism imbued in our society never harms men, but she does make an interesting point about her personal experiences from speaking to students in high schools throughout her career. When she asks students to give examples of sexism against their own gender, the girls, as a general rule, speak from personal experience. They talk about things that happen to them or things they have personally witnessed.

The boys tend to speak in hypotheticals and generalizations: disparities in family court, or the expectation that a man be the provider in a relationship. It’s very commonplace for feminists to talk about ways that the patriarchy ends up inadvertently hurting men, but Chemaly seems to worry that this tendency is an indication of missing the point; men have set the rules that now hurt men. Then the men who are hurt… blame feminists.

This review feels painfully brief, but I find it difficult to express my feelings about this book. If you are a woman, you will probably find the contents extremely validating and sometimes enraging. If you are a man, I hope you will find it eye-opening. It’s something that is at times difficult to read, but I think it’s important.

Thank you for reading! If you’ve read Rage Becomes Her please feel free to share your thoughts in the comments.

5 thoughts on “Review – Rage Becomes her: The Power of Women’s Anger, by Soraya Chemaly”