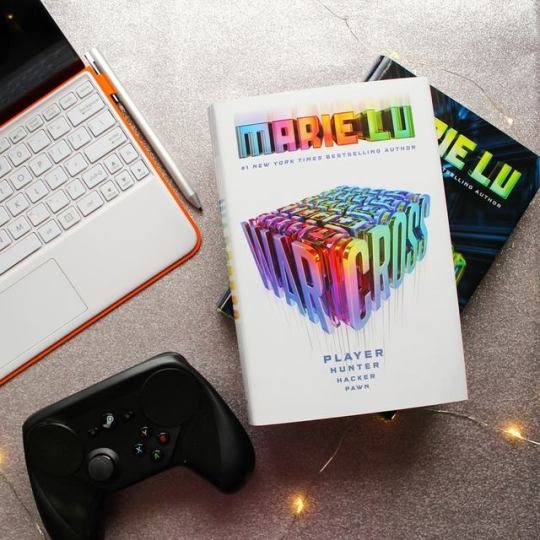 For the millions who log in every day, Warcross isn’t just a game—it’s a way of life.

The obsession started ten years ago and its fan base now spans the globe, some eager to escape from reality and others hoping to make a profit. Struggling to make ends meet, teenage hacker Emika Chen works as a bounty hunter, tracking down Warcross players who bet on the game illegally. But the bounty hunting world is a competitive one, and survival has not been easy. To make some quick cash, Emika takes a risk and hacks into the opening game of the international Warcross Championships—only to accidentally glitch herself into the action and become an overnight sensation.

Convinced she’s going to be arrested, Emika is shocked when instead she gets a call from the game’s creator, the elusive young billionaire Hideo Tanaka, with an irresistible offer. He needs a spy on the inside of this year’s tournament in order to uncover a security problem . . . and he wants Emika for the job. With no time to lose, Emika’s whisked off to Tokyo and thrust into a world of fame and fortune that she’s only dreamed of. But soon her investigation uncovers a sinister plot, with major consequences for the entire Warcross empire.

Warcross was kind of a frustrating read for me, because I like a lot of what Lu was trying to do, but some of her narrative choices and her writing style got under my skin. (This is nit-picky, but as an example, this book contains the ridiculously cliché phrase “I let out a breath I didn’t know I was holding” at least twice. Emika also mentions her “rainbow-colored hair” more times than I could count.) Maybe I should go easier on the writing style when it comes to YA novels, but I feel like one can write simply enough for the genre while still writing well, and this novel did not accomplish that.

The worldbuilding also felt somewhat sloppy in some respects. There was a lot of interesting stuff going on in regards to the virtual reality technology, but the descriptions felt inconsistent. For example, Warcross is a specific game that comes with the VR glasses that exist in this novel, but there seems to be no distinction drawn between playing that specific game and using the glasses in any other manner; it’s all “playing Warcross.” This feels like an intentional narrative choice rather than a slip-up (maybe to emphasize how integral the game has become in everyday life) but it just ended up feeling muddled to me.

Time for the obligatory Ready Player One comparisons. I’m of the unpopular opinion that Ready Player One is terrible (sorry, guys) and despite my issues with Warcross, I think I preferred it to Ready Player One. There is one thing I think Ready Player One does better, and that is in developing the real world well enough that it becomes obvious to the reader why a lot of people would prefer to spend their time in the Oasis. After finishing Warcross, I feel like I don’t know much about the real world in that novel outside of “there’s, like, a lot of crime.” However, Warcross makes a lot more of an effort for diversity and also doesn’t commit the crime of spending pages at a time on pop culture references that are clearly only for the author’s own amusement. Warcross also feels like it’s going to articulate a much more coherent moral message than Ready Player One ever managed to do, although that remains to be seen in Wildcard.

Warcross is an engaging and fast-paced novel with a likable protagonist, an interesting (if somewhat underdeveloped) setting, and a plot twist that will have you reaching for the second book. So while I didn’t love this, I’ll definitely be reading Wildcard soon.

Thank you for reading! Have you read Warcross? Please share your thoughts in the comments!
What’s your favorite novel where video games play an important role?