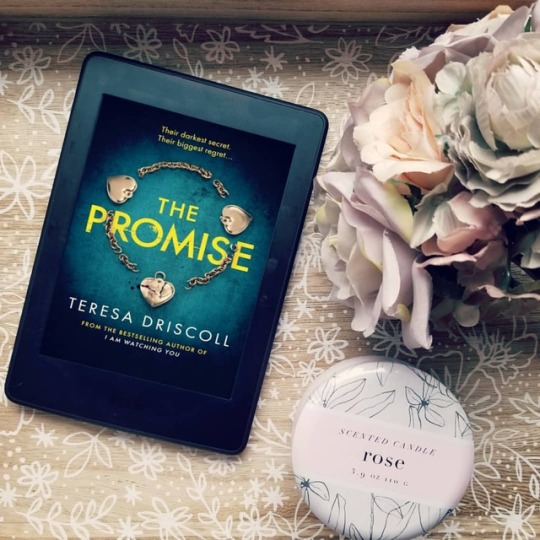 The Promise
by Teresa Driscoll

The chilling new psychological thriller from the #1 bestselling author of I Am Watching You.

It was their darkest secret. Three schoolgirls made a promise – to take the horrible truth of what they did to the grave.

Thirty years later, Beth and Sally have tried to put the trauma behind them. Though Carol has distanced herself from her former friends, the three are adamant that the truth must never come to light, even if the memory still haunts them.

But when some shocking news threatens to unearth their dark secret, Beth enlists the help of private investigator Matthew Hill to help her and Sally reconnect with estranged Carol ­– before the terrible act they committed as teenagers is revealed.

Beth wishes she could take back the vow they made.

But somebody is watching and will stop at nothing to ensure the secret stays buried. Now, with her beloved family in peril, can Beth still keep the promise?

My thanks to NetGalley and Thomas & Mercer for sending me an ARC of this book in exchange for an honest review. All opinions are my own and are not influenced by the publisher.

Teresa Driscoll first came onto my radar last year when I read I Am Watching You with my book club. While I wasn’t a huge fan of the ending of that novel, I did find it an overall really enjoyable reading experience, so I was quick to request a copy of The Promise when I saw it on NetGalley. The basic premise of the story (three women with a deep, dark secret going back to their boarding school days) was super intriguing to me and was giving off some Ruth Ware vibes.

Unfortunately, I think some of that promise was lost in the execution. Part of what fell flat for me was the sheer number of separate perspectives that Driscoll is trying to juggle within this book. The reader will spend time in the heads of Beth, Sally, and Carol, as well as Matthew, a private investigator which fans may recognize from Driscoll’s prior novel (I Am Watching You). I think limiting this to one or two perspectives may have made for a better reading experience. I’m not one to dislike multiple perspectives on principal, but I don’t think it worked very well here.

My other main issue with this was that the pacing felt rather slow. Almost 70% of the book is spend leading up to a big reveal which becomes a bit too easy to guess before you actually get to it. (Interestingly, this was the opposite problem I had with Driscoll’s last novel, which I thought dropped far too little foreshadowing and left me feeling a little cheated. This can be a really difficult balance to strike and may even vary from one reader to the next, so your mileage my vary.)

All that being said, there were some things that I really enjoyed about this novel. The relationships between the three women throughout the years were really fun to explore, and the story was atmospheric and full of suspense. The last quarter or so of the book picks up the pace in a huge way and made up for some of what I thought was lacking early in the story. This would be a good selection for a lot of fans of Ruth Ware, Liane Moriarty, and of course, Teresa Driscoll’s past work.

Thank you for reading! Does guessing the big twist ruin a mystery novel for you? Would you rather be surprised by the ending or validated in your suspicions? Let’s discuss in the comments!

3 thoughts on “The Promise, by Teresa Driscoll (Review)”