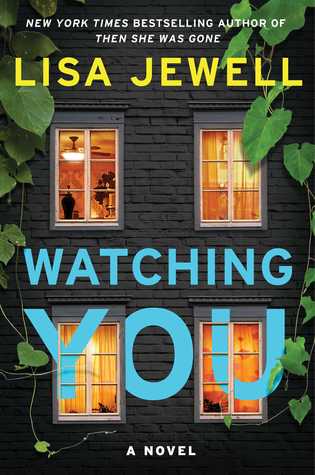 Watching You
by Lisa Jewell

As the headmaster credited with turning around the local school, Tom Fitzwilliam is beloved by one and all—including Joey Mullen, his new neighbor, who quickly develops an intense infatuation with this thoroughly charming yet unavailable man. Joey thinks her crush is a secret, but Tom’s teenaged son Freddie—a prodigy with aspirations of becoming a spy for MI5—excels in observing people and has witnessed Joey behaving strangely around his father.

One of Tom’s students, Jenna Tripp, also lives on the same street, and she’s not convinced her teacher is as squeaky clean as he seems. For one thing, he has taken a particular liking to her best friend and fellow classmate, and Jenna’s mother—whose mental health has admittedly been deteriorating in recent years—is convinced that Mr. Fitzwilliam is stalking her.

Watching You is a weird book for me to rate, because for most of the first half of the story, I was decidedly not invested. We know early on that there has been a murder, but a lot of the story focuses on other things and I really wasn’t dying to untangle the mystery. Think Big Little Lies, where the story opens with the aftermath of a murder, then goes on to focus on entirely unrelated things in the lives of those close to the incident. I definitely got a vibe that Lisa Jewell was inspired by Lianne Moriarty while reading this.

A major drawback for me, however, was that Lisa Jewell doesn’t seem quite as skilled as Moriarty when it comes to making the reader truly care about her characters. I spent a decent chunk of the book learning about the lives and backstories of characters who simply didn’t quite feel like people to me. However, by the latter half of the book, as the mystery started to fall into place, I started to feel glad I stuck with it.

Watching You plays with the reader’s expectations in a really fun way and is practically begging you to make assumptions that will later be proven wrong. The perspective shifts with each chapter, giving the reader a new, limited point of view and set of biases depending on which character is narrating. Alternating points of view can sometimes feel really sloppy, but I thought this was something that was handled really well throughout the novel. The reader will need to piece together clues known only by individual characters if they have any hope of guessing the resolution.

Watching You is a smart and twisty mystery story that may take a while to pique your interest… but definitely earns the time investment by the end.

Thank you for reading! Have you read Watching You? Please share your thoughts in the comments!

2 thoughts on “Watching You, by Lisa Jewell (Review)”