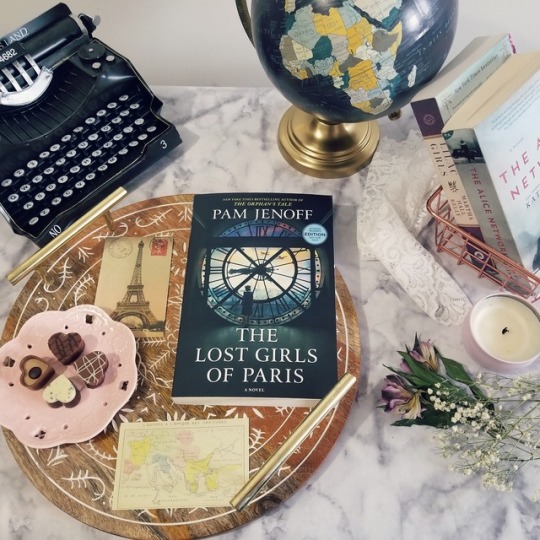 The Lost Girls of Paris
by Pam Jenoff

From the author of the runaway bestseller The Orphan’s Tale comes a remarkable story of friendship and courage centered around three women and a ring of female spies during World War II.

Grace Healey is rebuilding her life after losing her husband during the war. One morning while passing through Grand Central Terminal on her way to work, she finds an abandoned suitcase tucked beneath a bench. Unable to resist her own curiosity, Grace opens the suitcase, where she discovers a dozen photographs—each of a different woman. In a moment of impulse, Grace takes the photographs and quickly leaves the station.

Grace soon learns that the suitcase belonged to a woman named Eleanor Trigg, leader of a ring of female secret agents who were deployed out of London during the war. Twelve of these women were sent to Occupied Europe as couriers and radio operators to aid the resistance, but they never returned home, their fates a mystery. Setting out to learn the truth behind the women in the photographs, Grace finds herself drawn to a young mother turned agent named Marie, whose daring mission overseas reveals a remarkable story of friendship, valor and betrayal.

Vividly rendered and inspired by true events, New York Times bestselling author Pam Jenoff shines a light on the incredible heroics of the brave women of the war, and weaves a mesmerizing tale of courage, sisterhood and the great strength of women to survive in the hardest of circumstances.

I received a free copy of The Lost Girls of Paris from Booktrib with no obligation for a review. All opinions are my own.

The Lost Girls of Paris is a beautifully told tale in three alternating perspectives: Eleanor Trigg – SOE recruiter responsible for the division of women being trained to serve as spies and saboteurs.
Marie – One of Eleanor’s recruits, valued for impeccable French and thus her ability to seamlessly blend in in Paris.
Grace – With her story taking place in a slightly later timeline after the war, she is dealing with the loss of her husband when she becomes swept up in the mystery of what became of Eleanor’s girls.

Marie’s perspective became my favorite as the story went on, and while she is a great character, she is decidedly not a great spy. She is not great at working under pressure and makes more than one questionable decision. For some reviewers who did not enjoy the book as much as I did, this seemed to be the major source of frustration.

Personally, I was not bothered and I felt it demonstrated the kind of pressure the department was operating under at the time. The decision to include women as operatives wasn’t something that had been in the works for a long time; it was a decision made quickly in the midst of a horrific war and through pure necessity. Male operatives would stand out too much amidst the dearth of fighting age men left in civilian roles in Paris.

Were all of the female spies in this story totally incompetent? No, and that would have made for a horrible reading experience. On the contrary, one of my favorite things about Marie’s story was seeing how she compared herself to some of the other girls who had trained with her. She feels woefully inadequate in comparison, and above all else, scared. She represents a relatively average woman thrown into exceptional circumstances because desperate times call for desperate measures. She didn’t train for years for this and so was realistically out of her depth.

Eleanor was similarly intriguing in a totally different way: she held this peculiar status of being somewhat of an outsider as a foreigner and so not fully expected while simultaneously holding a position of power. While she has male superiors who look down on her for her origins as well as her gender, she is in charge of selecting, training, and deploying all of their female operatives. Aside from helping to win the war, Eleanor clearly really wants to prove herself.

Grace’s chapters were the least interesting to me from a character standpoint, with her personal issues holding less intrigue than the stories of the other point of view characters, but her obsession with untangling the mystery of the fate of Eleanor’s spies provides a stand-in for the reader’s own intrigue. Marie and Eleanor were in a spy drama; Grace is in a mystery novel.

The Lost Girls of Paris is inspired by true events and is an excellent selection for fans of books like The Alice Network and Lilac Girls.

Thank you for reading! What was the last historical fiction novel you read? What’s your favorite time period to read about? Let’s discuss in the comments!

3 thoughts on “The Lost Girls of Paris, by Pam Jenoff (Review)”