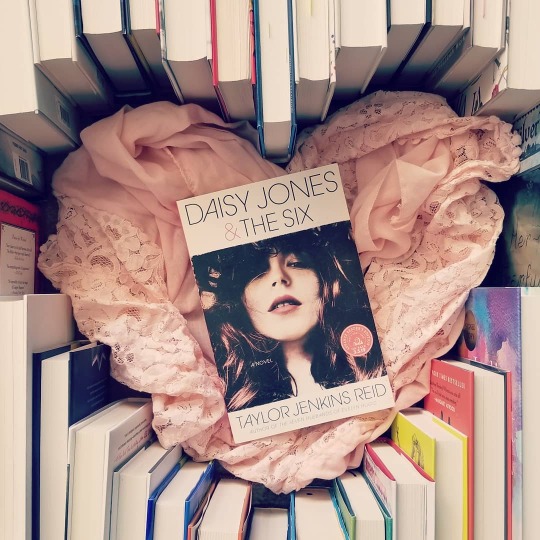 Daisy Jones and The Six
by Taylor Jenkins Reid

In 1979, Daisy Jones and The Six split up. Together, they had redefined the 70’s music scene, creating an iconic sound that rocked the world. Apart, they baffled a world that had hung on their every verse.

This book is an attempt to piece together a clear portrait of the band’s rise to fame and their abrupt and infamous split. The following oral history is a compilation of interviews, emails, transcripts, and lyrics, all pertaining to the personal and professional lives of the members of the band The Six and singer Daisy Jones.

While I have aimed for a comprehensive and exhaustive approach, I must acknowledge that full and complete accounts from all parties involved has proved impossible. Some people were easier to track down than others, some were more willing to talk than others, and some, unfortunately, have passed on.

All of which is to say that while this is the first and only authorised account from all represented perspectives, it should be noted that, in matters both big and small, reasonable people disagree.

The truth often lies, unclaimed, in the middle.

My thanks to NetGalley, BookSparks, and Ballantine Books for sending me an ARC of this book in exchange for an honest review. All opinions are my own and are not influenced by the publisher.

“We love broken, beautiful people. And it doesn’t get much more obviously broken and more classically beautiful than Daisy Jones.”

Daisy Jones and The Six is the story of the rise and fall of a fictional rock band from the 1970’s. For fans of The Seven Husbands of Evelyn Hugo, Daisy Jones will feel somewhat familiar as a protagonist. An absolute icon in the entertainment world, gorgeous, and stubborn, she is haunted by an all-consuming vice and forbidden love. For Evelyn Hugo, her love of money and her inability to be open about her sexual orientation stood between her and the love of her life. Daisy Jones struggles similarly with drug addiction and an obsession with someone who is emotionally unavailable to her.

In terms of the actual storytelling, however, these novels are quite different. Daisy Jones and The Six is told entirely in the format of an interview with members of the band and others who were close to them professionally or personally. The reader is made to feel as if they are watching a documentary about the band. While this was interesting in concept, it made for rather dry storytelling after a while, and I think this was the main thing that kept me from being able to rate this as five stars. Perhaps this is down to personal taste and your experience may differ greatly, but I felt I would have enjoyed the story a lot more if the interview format was only a portion of the book and was used to break up chapters in a more traditional narrative style.

Billy: Karen was just a great musician. That was all there was to it. I always say I don’t care if you’re a man, woman, white, black, gay, straight, or anything in between – if you play well, you play well. Music is a great equalizer in that way.
Karen: Men often think they deserve a sticker for treating women like people.

Gender played a really interesting role in this novel, particularly in terms of respect and power struggles. Daisy Jones struggles to be taken seriously when she is starting out as a solo artist. She clashes intensely with Billy’s authoritarian style of running The Six when she begins to integrate into their band. Her ultra-feminine style and revealing clothing also get under the skin of bandmate Karen, who has adopted somewhat of a tomboy persona in an attempt to make the men around her take her seriously.

One thing really love about Reid’s work is her ability to write realistically flawed characters while still allowing the reader to feel like it’s worth rooting for them. Daisy Jones is stubborn, selfish, impulsive, and narcissistic. However, we have the benefit of understanding her upbringing (or lack thereof) and the interview format of the book also allows us to see the story through the eyes of an older Daisy, who seems to understand these flaws and to have put work into overcoming them.

Taylor Jenkins Reid had truly brought these characters and the era in which they were famous to life. While this isn’t my favorite of her books (if you’re new to her work, I highly recommend The Seven Husbands of Evelyn Hugo as a starting point), I do highly recommend it. It’s a fun read and will have you wishing for a soundtrack to go with it. And since Reese Witherspoon is producing a TV adaptation, it sounds like we might get just that.

Daisy: I had absolutely no interest in being somebody else’s muse.
I am not a muse.
I am the somebody.
End of fucking story.

Thanks for reading! If you’ve read this book, please feel free to share your own thoughts.
Have you read any books in an interesting format such as the interview style of Daisy Jones and The Six? Let’s discuss in the comments!