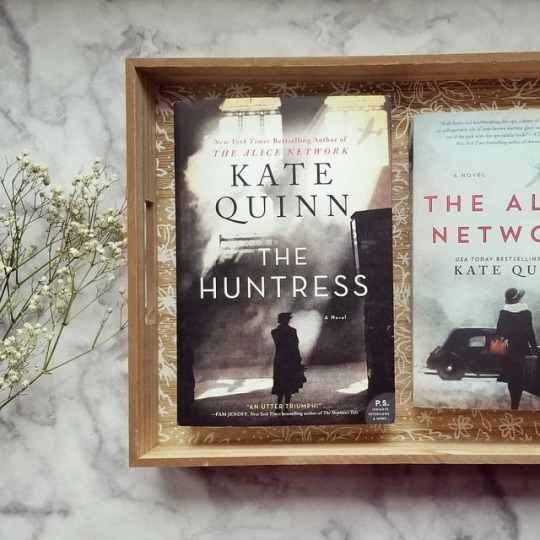 The Huntress
by Kate Quinn

From the author of the New York Times and USA Today bestselling novel, The Alice Network, comes another fascinating historical novel about a battle-haunted English journalist and a Russian female bomber pilot who join forces to track the Huntress, a Nazi war criminal gone to ground in America.

In the aftermath of war, the hunter becomes the hunted…

Bold, reckless Nina Markova grows up on the icy edge of Soviet Russia, dreaming of flight and fearing nothing. When the tide of war sweeps over her homeland, she gambles everything to join the infamous Night Witches, an all-female night bomber regiment wreaking havoc on Hitler’s eastern front. But when she is downed behind enemy lines and thrown across the path of a lethal Nazi murderess known as the Huntress, Nina must use all her wits to survive.

British war correspondent Ian Graham has witnessed the horrors of war from Omaha Beach to the Nuremberg Trials. He abandons journalism after the war to become a Nazi hunter, yet one target eludes him: the Huntress. Fierce, disciplined Ian must join forces with brazen, cocksure Nina, the only witness to escape the Huntress alive. But a shared secret could derail their mission, unless Ian and Nina force themselves to confront it.

Seventeen-year-old Jordan McBride grows up in post WWII Boston, determined despite family opposition to become a photographer. At first delighted when her long-widowed father brings home a fiancée, Jordan grows increasingly disquieted by the soft-spoken German widow who seems to be hiding something. Armed only with her camera and her wits, Jordan delves into her new stepmother’s past and slowly realizes there are mysteries buried deep in her family. But Jordan’s search for the truth may threaten all she holds dear.

My thanks to William Morrow for sending me a free copy of this book in exchange for an honest review. All opinions are my own and are not influenced by the publisher.

Kate Quinn has such a remarkable gift when it comes to creating seriously captivating characters. It’s been almost a week since I finished reading and I keep finding myself thinking about Nina, a ruthless, Nazi-killing hellcat who probably really needs a hug. I love Nina to death, and her adoration for real-life Night Witch Marina Raskova had me wanting to learn more about these women. (If anyone knows any good documentaries, drop a link in the comments and I’ll love you forever.)

At 560 pages, The Huntress is a somewhat lengthy read, and I found myself annoyed every time I had to put it down. Despite the backdrop of war and violence, the story isn’t super action packed or fast-paced. It’s a bit of a slow burn and very character driven.

I (obviously) found Nina to be the most compelling character, but the story is told through three separate point of view characters. Nina’s perspective takes place during the war, whereas Jordan and Ian’s perspectives take place after, during Ian’s hunt for the infamous Nazi known as The Huntress. Nina exists in both timelines, as she teams up with Ian, but her direct perspective is limited to her life leading up to the war through the first day she meets Ian. Nina comes from a remarkably dysfunctional family, with a drunken and abusive father and siblings she describes as more or less feral. She is damaged in a lot of ways, but her hardships also prepared her for the harshness of war.

Ian also made for a really compelling character. No spoilers here, but he has a personal vendetta that fuels a lot of his desire to take down The Huntress. He has a background as a war correspondent, and gives off a distinct air of survivor’s guilt. He saw a lot of atrocities during his reporting on the war, and I think Quinn really nailed down the psychology of what that can do to a person. Ian, like a lot of people who has endured trauma, has internalized this idea that he hasn’t fully “earned” his emotional disturbances. Soldiers fought and died on the front lines; he wrote articles about it. In the aftermath of trauma, it’s sadly so common to see people downplay what happened to them, to dismiss their rights to their own feelings on the basis that someone else had it worse. Ian exemplifies this mindset and I really appreciated seeing an author portray a character like this in a way that seems to validate that struggle.

Jordan, the final POV character, is a normal young girl living in America who has her life turned upside-down by The Huntress and those who are searching for her. She has suspicions about her new step-mother early on, which she buries to keep her father happy. A lot of her story line, however, has little to do with the rest of the book. She is a budding young photographer who wants to create a career for herself in a time when women were largely expected to get married and be housewives. She sees nearly every scene as if she’s looking through her camera, constantly mentally framing shots even when she doesn’t have her camera with her.

I absolutely enjoyed every page of this story. Quinn’s last novel, The Alice Network, was a ridiculously tough act to follow, but The Huntress did not disappoint in the slightest. This novel is an excellent choice for fans of The Lost Girls of Paris, Lilac Girls. and of course, Kate Quinn’s past work.

Thank you for reading! Have you read The Huntress? Please share your thoughts in the comments!

1 thought on “The Huntress, by Kate Quinn (Review)”