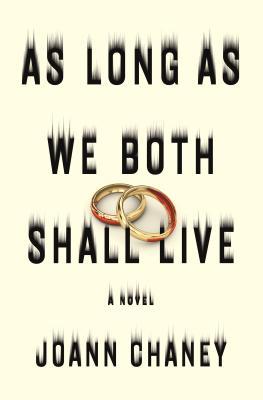 As Long as We Both Shall Live
by JoAnn Chaney

What happens when you’re really, truly done making your marriage work? You can’t be married to someone without sometimes wanting to bash them over the head…
As Long As We Both Shall Live is JoAnn Chaney’s wicked, masterful examination of a marriage gone very wrong, a marriage with lots of secrets…

“My wife! I think she’s dead!” Matt frantically tells park rangers that he and his wife, Marie, were hiking when she fell off a cliff into the raging river below. They start a search, but they aren’t hopeful: no one could have survived that fall. It was a tragic accident.

But Matt’s first wife also died in suspicious circumstances. And when the police pull a body out of the river, they have a lot more questions for Matt.

Detectives Loren and Spengler want to know if Matt is a grieving, twice-unlucky husband or a cold-blooded murderer. They dig into the couple’s lives to see what they can unearth. And they find that love’s got teeth, it’s got claws, and once it hitches you to a person, it’s tough to rip yourself free.

So what happens when you’re done making it work?

Oh, boy, this book was definitely not for me. I’ve said it on here before, but I’m a bit of a thriller snob. Excessive plot twists, overly tropey plot lines, and stock characters, oh my! While I definitely enjoy the occasional thriller (The Silent Patient, An Anonymous Girl, and No Exit come to mind) this… was not one of those for me. Spoilers ahead for this review (as much as I normally hate to include them), because I don’t know how to explain my issues with this book without going into major plot points.

The prologue had me hooked and I went into this novel feeling optimistic. The opening line reads, “If you try to kill your wife without a plan, you will fail,” and goes on to lambaste the stupidity of the average killer, eventually closing with this: “So here’s the thing: if you want to kill your wife, don’t. Don’t kill her, don’t touch her. Ditch the bitch, if you have to, get on with your life. Or make it work. But kill her? Nope. You want the opposite of Nike’s advice: Just don’t do it. Because sooner or later, no matter how careful you think you’ve been, you’ll get caught.”

Given the genre, you can pretty much assume that there’s some misdirection going on here, and this won’t be a book about a man killing his wife and getting caught. So, what’s the next most obvious assumption when Matt’s wife disappears? If you’re picturing Amy from Gone Girl right now, bingo. As if to desperately try to convince the readers that the novel is paying homage to Gone Girl rather than blatantly trying to ride on its coattails, Matt references his wife’s obsession with the book while trying to convince the detectives that he’s being framed.

Speaking of the detectives, a frankly uncomfortable amount of time is spent inside the head of the spectacularly unlikable Detective Ralph Loren. Loren is totally obsessed with sex and crude seemingly for the sake of being crude (and then genuinely shocked when another character calls him crude… okay, buddy.) The author seems hell-bent on convincing the reader that this serial sexual harasser secretly has a heart of gold, with numerous characters remarking on what a great guy he is deep down.

I’d say that there was some social commentary intended here about how willing people are to look the other way when it comes to men like this, but it doesn’t seem supported by the narrative. There’s an entire mystery subplot surrounding whether or not Loren killed his prior partner and it turns out he was innocent the whole time. You see, Loren was the only one who cared that his partner was beating his wife, and it was the wife who finally snapped and killed him. Loren got blackmailed roped into covering up the crime, when his only real crime was caring too much about a battered woman. …okay.

Finally, what is it with thrillers that think they can make a compelling story by pure quantity of twists? You have to earn your twists by setting them up, and less is more. Think about Gone Girl, the book that this one so desperately wants to emulate. There were a few things that could be considered minor twists, but really the main thing was that Amy was behind her own disappearance. That was the whole crux of the story, Flynn focused on it, and it worked really well. I’m writing this review a while after finishing the book, and three big twists come to mind right away. I’d be willing to wager that I’ve forgotten one or two of them already.

Save yourself some time and frustration and just read Gone Girl.

1 thought on “As Long as We Both Shall Live, by JoAnn Chaney (Review)”