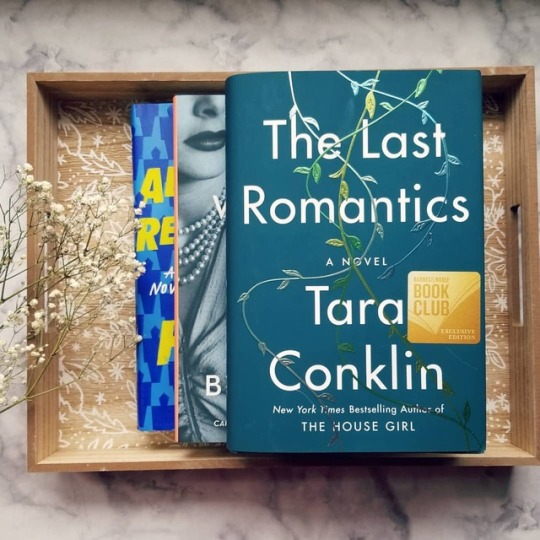 The Last Romantics
by Tara Conklin

The New York Times bestselling author of The House Girl explores the lives of four siblings in this ambitious and absorbing novel in the vein of Commonwealth and The Interestings.

“The greatest works of poetry, what makes each of us a poet, are the stories we tell about ourselves. We create them out of family and blood and friends and love and hate and what we’ve read and watched and witnessed. Longing and regret, illness, broken bones, broken hearts, achievements, money won and lost, palm readings and visions. We tell these stories until we believe them.”

When the renowned poet Fiona Skinner is asked about the inspiration behind her iconic work, The Love Poem, she tells her audience a story about her family and a betrayal that reverberates through time.

It begins in a big yellow house with a funeral, an iron poker, and a brief variation forever known as the Pause: a free and feral summer in a middle-class Connecticut town. Caught between the predictable life they once led and an uncertain future that stretches before them, the Skinner siblings—fierce Renee, sensitive Caroline, golden boy Joe and watchful Fiona—emerge from the Pause staunchly loyal and deeply connected. Two decades later, the siblings find themselves once again confronted with a family crisis that tests the strength of these bonds and forces them to question the life choices they’ve made and ask what, exactly, they will do for love.

A sweeping yet intimate epic about one American family, The Last Romantics is an unforgettable exploration of the ties that bind us together, the responsibilities we embrace and the duties we resent, and how we can lose—and sometimes rescue—the ones we love. A novel that pierces the heart and lingers in the mind, it is also a beautiful meditation on the power of stories—how they navigate us through difficult times, help us understand the past, and point the way toward our future.

“If you live long enough and well enough to know love, its various permutations and shades, you will falter. You will break someone’s heart. Fairy tales don’t tell you that. Poetry doesn’t either.”

I had a serious love-hate relationship with this book. To start with, it’s stylistically beautiful. Fiona, the point of view character, is a poet, and this shines through in the writing style and really contributes to giving Fiona a distinct voice. (This aspect reminded me a lot of The Air You Breathe, by Frances de Pontes Peebles.)

This then is the true lesson: there is nothing romantic about love. Only the most naive believe it will save them. Only the hardiest of us will survive it.

And yet, And yet! We believe in love because we want to believe in it. Because really what else is there, amid all our glorious follies and urges and weaknesses and stumbles? The magic, the hope, the gorgeous idea of it. Because when the lights go out and we sit waiting in the dark, what do our fingers seek? Who do we teach for?

The story begins with the major characters (a group of siblings) as children, as they endure what they later dub “The Pause,” the three year period in the wake of their father’s death when their mother rarely left her bedroom and they were left to fend for themselves. They are all thrust into roles which arguably alter their personalities in major ways for the rest of their lives, with the younger siblings’ sense of security shaken and the older siblings dealing with the additional burden of being forced into a parental role. The relationships between the siblings were one of the big highlights of the novel, with their familial bonds waxing and waning over the years and being tested in various ways.

The story itself… sometimes lost me. For starters, I didn’t entirely understand what Conklin was going for with her choice of framing device, as it didn’t seem to add much to the story. Fionna’s life story is told in retrospect from a somewhat dystopian future. She has become a world-famous poet and is speaking at an event and reminiscing on her life. Not a lot happens during the course of the events of the framing device, but just enough occurs that it leaves the reader expecting the focus to shift to the later timeline at some point. But there’s no follow through, and in the end I was left feeling like the story would have lost nothing if it had all simply been told in past tense from Fiona’s point of view without the framing device.

My second issue with this book has to do with a whirlwind romance that occurs for one of the characters when they are adults. I don’t want to give any spoilers, so I’ll be vague here, but suffice it to say that the character in question has as lot of problems and meets someone who is equally troubled. The way the romance plays out seems unrealistic and optimistic to a fault, in a way. It’s cut short for reasons I won’t spoil, but it seems as if Conklin wants us to believe that, had it not been for that, this would have turned everything around in that character’s life. And, despite the brevity of the relationship, it’s absolutely, 100%, for sure true love.

Can a good relationship and support system help someone who is determined to turn their life around do so? Sure. Do I feel it was “earned” in this novel? No. Conklin seems to want us to buy into the pure potential in this relationship as some of the other siblings do, when the whole thing felt like an impending disaster to me.

Overall, I thought this was worth the read, despite the issues I had with it. Have you read The Last Romantics? Please share your thoughts in the comments! What do you think about the title of the novel in relation to Fiona’s blog of a similar name? Why do you think Conklin made this choice? Let’s discuss!

5 thoughts on “The Last Romantics, by Tara Conklin (Review)”