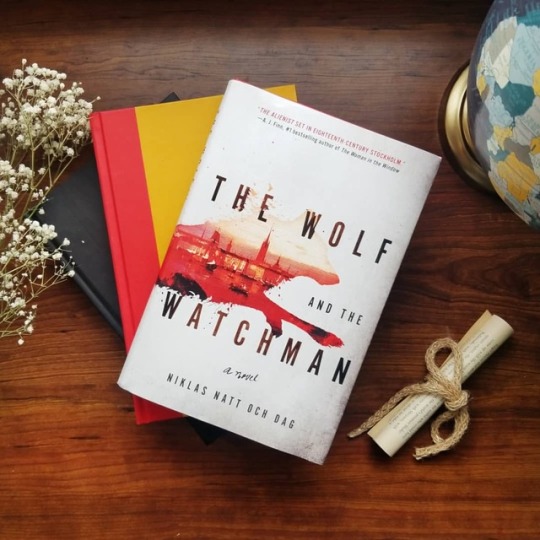 The Wolf and the Watchman
by Niklas Natt och Dag

In this breathtakingly bold, intricately constructed novel set in 18th century Stockholm, a dying man searches among the city’s teeming streets, dark corners, and intriguing inhabitants to unmask a ruthless murderer—perfect for fans of Perfume and The Alienist.

It is 1793. Four years after the storming of the Bastille in France and more than a year after the death of King Gustav III of Sweden, paranoia and whispered conspiracies are Stockholm’s daily bread. A promise of violence crackles in the air as ordinary citizens feel increasingly vulnerable to the whims of those in power.

When Mickel Cardell, a crippled ex-solider and former night watchman, finds a mutilated body floating in the city’s malodorous lake, he feels compelled to give the unidentifiable man a proper burial. For Cecil Winge, a brilliant lawyer turned consulting detective to the Stockholm police, a body with no arms, legs, or eyes is a formidable puzzle and one last chance to set things right before he loses his battle to consumption. Together, Winge and Cardell scour Stockholm to discover the body’s identity, encountering the sordid underbelly of the city’s elite. Meanwhile, Kristofer Blix—the handsome son of a farmer—leaves rural life for the alluring charms of the capital and ambitions of becoming a doctor. His letters to his sister chronicle his wild good times and terrible misfortunes, which lead him down a treacherous path.

In another corner of the city, a young woman—Anna-Stina—is consigned to the workhouse after she upsets her parish priest. Her unlikely escape plan takes on new urgency when a sadistic guard marks her as his next victim.

Over the course of the novel, these extraordinary characters cross paths and collide in shocking and unforgettable ways. Niklas Natt och Dag paints a deliciously dark portrait of late 18th century Stockholm, and the frightful yet fascinating reality lurking behind the powdered and painted veneer of the era.

My thanks to Atria Books for sending me a copy of this book in exchange for an honest review. All opinions are my own and are not influenced by the publisher.

The Wolf and the Watchman is a slow burn mystery set in 1790’s Stockholm and it is dark and gritty, to stay the least. The story opens with the discovery of a body which has been badly mutilated over what seems to be a long period of time, then dumped unceremoniously in a river. The mystery at the heart of the novel is intriguing: what could possibly lead a person to commit such a heinous crime? This was thought out and unspeakably brutal, the exact opposite of a crime of passion.

18th century Stockholm is brought to life in the pages of The Wolf and the Watchman, but the portrayal is overwhelmingly dark and dreary. Niklas natt Och Dag seems fascinated with the dark side of human nature, and the story explores the myriad of ways that people exert power of one another: for personal gain, for revenge, out of fear, or for the simple gratification of the act itself. Despite the presence of characters investigating the murder in the hopes of bringing justice, the overall impression is quite morose. (As of this writing, this novel has a 3.95 average on GoodReads, so I think it’s worth noting my rating is a little below the average. This may be less due to quality than it is to personal taste; I found the book a tad too dark.)

The major characters were very well developed, and I was particularly intrigued by Kristofer Blix, a young man who worked as an apprentice surgeon during the war. His role in the mystery is not immediately clear, Kristofer’s sections are told in the form of letters to his sister detailing his downward spiral culminating in his connection to the larger story.

The Wolf and the Watchman is a great choice for fans of dark and gritty historical fiction and slow burn mystery novels.

Thank you for reading! Have you read The Wolf and the Watchman? Please share your thoughts in the comments!

1 thought on “The Wolf and the Watchman, by Niklas Natt och Dag (Review)”