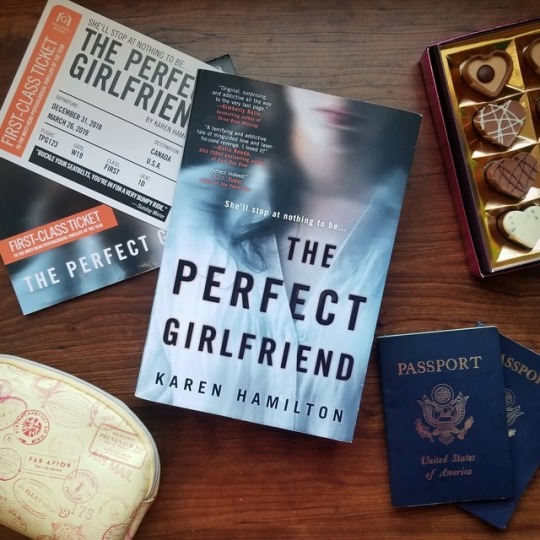 The Perfect Girlfriend
by Karen Hamilton

YOU’VE NEVER READ A LOVE STORY AS TWISTED AS THIS.

She will follow him anywhere. She’s even become a flight attendant for his airline so she can keep a closer eye on him.

They are meant to be.

The fact that Nate broke up with her six months ago means nothing. Because Juliette has a plan to win him back.

She is the perfect girlfriend. And she’ll make sure no one stops her from getting exactly what she wants.

True love hurts, but Juliette knows it’s worth all the pain…

My thanks to Booksparks and Graydon House for sending me a copy of this book in exchange for an honest review. All opinions are my own and are not influenced by the publisher.

I’ve said a lot on this blog that I’m overly picky about thrillers, and when I need to write a negative review of one, I tend to preface it with that information. It’s my little “Dear Book, it’s not you, it’s me,” disclaimer. In this case, though, I really don’t think it’s me. This was… rough. Despite the interesting narrative choice of choosing a villain as the point of view character, The Perfect Girlfriend is simply the one thing it’s unforgivable for a thriller to be: boring.

The novel follows Juliette, who is hardcore obsessed with her ex boyfriend. The story opens with a traumatic event from her childhood; I don’t know if this is meant to make her more sympathetic throughout all of the awful things she’ll then go on to do, or if it’s simply there to give a “reason” as to why she’s a bit… unbalanced. In any case, something about it feels very tacked-on, as if the author realized she needed to give Juliette some meat to her personality other than an all-consuming obsession with Nate, but it certainly doesn’t have the impact of making her feel multi-dimensional.

After the breakup, Juliette gets a job as a flight attendant in order to be closer to Nate, who is a pilot. With the two of them now working for the same airline, she now simply has to wait to “coincidentally” bump into him and leap on the opportunity to rekindle the old flame. The whole flight attendant job is (part of) what I’m talking about when I say this book is boring.

I checked the author’s GoodReads profile to confirm a nagging suspicion and, lo and behold, she formerly “worked as cabin crew for a major airline.” The sheer amount of rambling about the ins and outs of being a flight attendant left the impression that the author was itching for a way to work some of her insider information into the novel. Unfortunately, it was just a bit much, and seemed particularly unnatural given that the story is told from Juliette’s perspective, and Juliette doesn’t care about being a flight attendant; she’s simply using the job as a means to get to Nate.

But beyond the surplus of tangential information, there was simply nothing surprising in the plot. Towards the end, there is a confrontation on a plane which leads into what I’m assuming is meant to be a “big reveal,” but even at that point I was just left thinking, “Well… yeah, clearly.”

Furthermore, I’m simply sick to death of stories about a woman obsessed with a man. Yes, I know, this was a stalker story, so I knew what I was getting into going into it, but can we please do away with female characters who have nothing to their personalities beyond their acute fixation on a man? We are not little baby ducks who imprint on the first one to give us the time of day. I promise.

Needless to say, this one was not a hit for me. However, the GoodReads algorithm says fans of this book also enjoyed: The Perfect Girlfriend to fans of Beautiful Bad, by Annie Ward, The Rival, by Charlotte Duckworth, and I’ll Be Watching You, by Courtney Evan Tate, so if you’ve read and enjoyed any of those, you may have a very different experience with this one than I did.

Thank you for reading! This book hit some of my biggest pet peeves when it comes to fiction. What are some of yours? Let me know in the comments!

2 thoughts on “The Perfect Girlfriend, by Karen Hamilton (Review)”