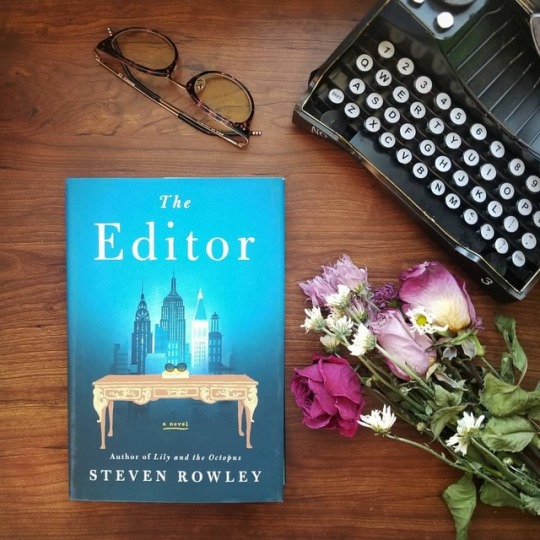 The Editor
by Steven Rowley

From the bestselling author of Lily and the Octopus comes a novel about a struggling writer who gets his big break, with a little help from the most famous woman in America.

After years of trying to make it as a writer in 1990s New York City, James Smale finally sells his novel to an editor at a major publishing house: none other than Jacqueline Kennedy Onassis. Jackie–or Mrs. Onassis, as she’s known in the office–has fallen in love with James’s candidly autobiographical novel, one that exposes his own dysfunctional family. But when the book’s forthcoming publication threatens to unravel already fragile relationships, both within his family and with his partner, James finds that he can’t bring himself to finish the manuscript.

Jackie and James develop an unexpected friendship, and she pushes him to write an authentic ending, encouraging him to head home to confront the truth about his relationship with his mother. Then a long-held family secret is revealed, and he realizes his editor may have had a larger plan that goes beyond the page…

From the bestselling author of Lily and the Octopus comes a funny, poignant, and highly original novel about an author whose relationship with his very famous book editor will change him forever–both as a writer and a son.

The Editor is Steven Rowley’s second novel, the first being Lily and the Octopus. Lily was a cute and sweet book, but a bit… odd, and I do have to say that The Editor feels like a big step up for Rowley as an author.

Imagine entering into a working relationship with an unknown person only to encounter an absolute cultural icon like Jackie Kennedy. The Editor is in part about the slow shift that occurs between viewing someone like that as a concept and coming to know them as a human being. The protagonist, James Smale, is initially starstruck by Jackie, but throughout the course of working on his semi-biographical novel with her, necessarily bears his soul, and a sense of mutual affection grows between the two. It had me thinking of the slow shift between Monique and Evelyn in The Seven Husbands of Evelyn Hugo, so if that appealed to you as a reader, you’ll definitely find something to love in this book.

The novel James is working through with Jackie is inspired by events of his childhood. To work out all the kinks in the story, he needs to reframe his thinking and work through some unresolved personal issues, primarily involving his mother. The Editor, despite the potentially show-stealing presence of Jackie Kennedy, is at its heart a family drama. Unresolved conflicts and a little nudging from Jackie eventually lead James back to his childhood home to confront his demons…. or his family, as it were.

Rowley writes with such a sense of sincerity balanced with lighthearted humor. Jackie challenges James to address the truth behind his fiction and the result is emotionally raw and eventually heartwarming. The Editor is a story about the emotional vulnerability that is necessary for healing and the underlying humanity of those who seem larger than life. Rowley has definitely improved since his first novel, and The Editor is an absolute gem. I can’t wait to see what he writes next!

Question of the day: If you were working on a novel and could have the help of any historical figure, who would you choose? Let me know in the comments!

2 thoughts on “The Editor, by Steven Rowley (Review)”