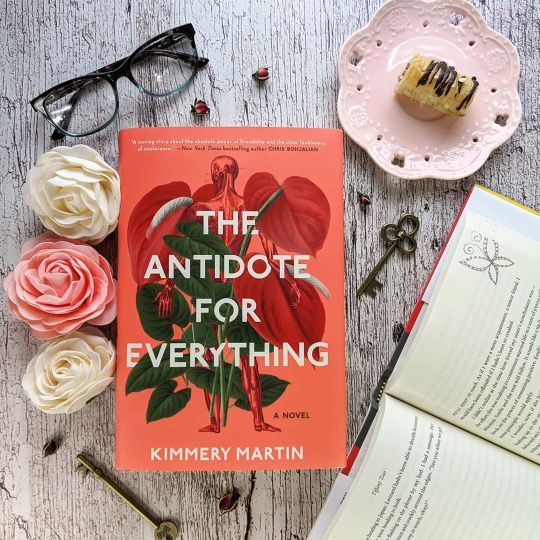 The Antidote For Everything
by Kimmery Martin

In this whip-smart and timely novel from acclaimed author Kimmery Martin, two doctors travel a surprising path when they must choose between treating their patients and keeping their jobs.

Georgia Brown’s profession as a urologist requires her to interact with plenty of naked men, but her romantic prospects have fizzled. The most important person in her life is her friend Jonah Tsukada, a funny, empathetic family medicine doctor who works at the same hospital in Charleston, South Carolina and who has become as close as family to her.

Just after Georgia leaves the country for a medical conference, Jonah shares startling news. The hospital is instructing doctors to stop providing medical care for transgender patients. Jonah, a gay man, is the first to be fired when he refuses to abandon his patients. Stunned by the predicament of her closest friend, Georgia’s natural instinct is to fight alongside him. But when her attempts to address the situation result in incalculable harm, both Georgia and Jonah find themselves facing the loss of much more than their careers.

I received a free copy of this book in my role as blogger for The Girly Book Club. All opinions are my own and are not influenced by the publisher.

Despite the wildly different subject matter, this book had me thinking a lot about the controversy surrounding American Dirt while I was reading. The story so heavily involves LGBTQ issues, while the author is a straight, cisgender woman. I feel strongly that, while anyone can write about anything, #OwnVoices authors will, by and large, do it better. The Antidote For Everything and American Dirt were both ambitious books, but there are doubts as to how well equipped the authors were to tell the stories they wanted to tell.

A major character within the story is a gay man, and there are minor transgender characters, but the story is told through the lens of Georgia Brown, a straight, cisgender woman much like the author. The thing is, it never felt like this should have been Georgia’s story to tell, and there was no compelling reason I could think of for her to be the protagonist other than the fact that she was the character the author found most relatable.

You can read my full thoughts on this title over on the Girly Book Club’s website.

Have you ever read a book that you wished had been told from the perspective of a different character within the story? Why was that? Tell me about it in the comments.