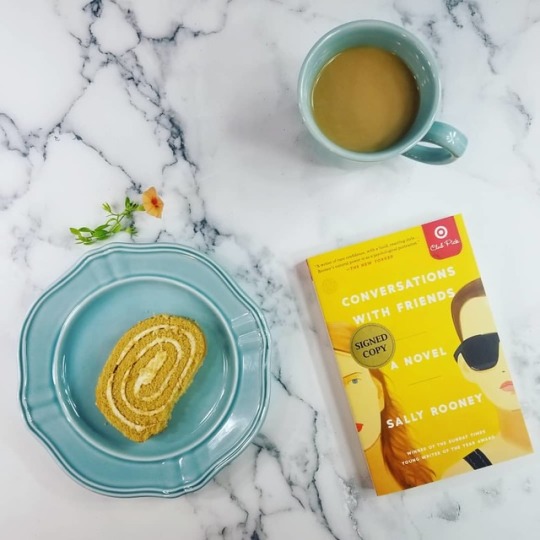 Conversations With Friends
by Sally Rooney

A sharply intelligent novel about two college students and the strange, unexpected connection they forge with a married couple.

Frances is twenty-one years old, cool-headed, and darkly observant. A college student and aspiring writer, she devotes herself to a life of the mind–and to the beautiful and endlessly self-possessed Bobbi, her best friend and comrade-in-arms. Lovers at school, the two young women now perform spoken-word poetry together in Dublin, where a journalist named Melissa spots their potential. Drawn into Melissa’s orbit, Frances is reluctantly impressed by the older woman’s sophisticated home and tall, handsome husband. Private property, Frances believes, is a cultural evil–and Nick, a bored actor who never quite lived up to his potential, looks like patriarchy made flesh. But however amusing their flirtation seems at first, it gives way to a strange intimacy neither of them expect.As Frances tries to keep her life in check, her relationships increasingly resist her control: with Nick, with her difficult and unhappy father, and finally even with Bobbi. Desperate to reconcile herself to the desires and vulnerabilities of her body, Frances’s intellectual certainties begin to yield to something new: a painful and disorienting way of living from moment to moment.

Written with gem-like precision and probing intelligence, Conversations With Friends is wonderfully alive to the pleasures and dangers of youth.”

“Gradually the waiting began to feel less like waiting and more like this was simply what life was: the distracting tasks undertaken while the thing you are waiting for continues not to happen.”

As you can clearly see by the rating, I was not a fan of this book. I was so excited to get into it because I’d heard lovely things about the author and I stumbled across an autographed copy. (I’ll buy pretty much anything that’s autographed. It’s a problem.) Unfortunately, Conversations with Friends was immensely disappointing.

First and foremost, the prose is all very matter of fact and devoid of feeling. This may have been an intentional writing choice to reflect some level of emotional numbness of the protagonist while she’s going through an odd and difficult time in her life. Nonetheless, the end result makes for a very dry reading experience. Frances is dealing with some really heavy things in regards to her mental and physical health, but none of it was emotionally evocative in the slightest for the reader.

The story, which focuses on the relationships between Frances, her best friend Bobbi, and a married couple whom they befriend,  can essentially be summarized as “terrible people being terrible to each other.” The dry writing style could have easily been redeemed for me by an interesting plot, but nothing about this drew me into the story. The major thrust is an extra-marital affair that is wholly uninteresting in every way. Bland Frances gets together with a married, bland, almost-famous actor who’s using her 21-year-old body to make himself feel like he’s worthwhile as his youth and chances at success and fame fade away. Blah.

Frances seems so passive throughout the entire narrative and it drove me crazy. Frances doesn’t do much. Things happen to Frances and she says, “Oh, okay, I guess this is happening.” The affair with the married man, the come-ons from her best friend, life in general, it all just seems to happen without Frances giving much thought as to whether or not she wants these things or expending much effort to exert any semblance control over her life.

Her best friend, Bobbi, is even worse, practically oozing smugness at every opportunity. (Bobbi remarks at one point that Frances doesn’t really have a personality. Bobbi is right, but lord, this is how she talks to her best friend, so you can imagine how she comes across to the rest of the world.

I was so prepared to like this book. Lesbian and bisexual representation, mental and physical health themes, and explorations of complicated relationships? This could have been so interesting. Instead, it was simply boring and occasionally irritating. Oh, well. On to the next one!