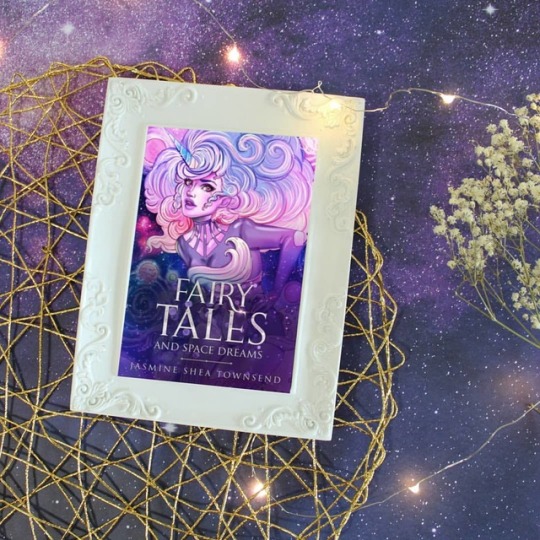 “Fairy Tales and Space Dreams” is a fantasy and science fiction anthology containing three fantasy and three sci-fi stories. The synopses of each story are as follows:

“Princess Snow White” is a retelling of Snow White whereas she has hair as white as snow and skin as black as ebony, rather than the other way around. Although the original fairy tale lends this story its bones, this version of Snow White deals with the idea of Afrocentric beauty as an acceptable standard, as opposed to Eurocentric beauty being the only standard.

“The Sea and the Stars” is a queer love story between a mermaid wallflowering at a party and a star that’s fallen from the sky.

“Rapunzel the Night Maiden” is a retelling in which Rapunzel finds out a secret about her identity and goes on an adventure to find her people.

“Omega Star Genesis” takes place far in the future, when humans are making a mass exodus from a dying Earth to flee a deadly virus. They are on a 10-year trip to Alpha Centauri when the Captain finds out their head engineer is building illegal A.I.s

“The Cosmic Adventures of Sophie Zetyld” follows River, an ordinary grad student living an ordinary life in the suburbs when a comet is spotted soaring over his town. He later finds out that that wasn’t a comet at all. It was an omni-dimensional space being named Sophie, who’s come to let him know that he’s been chosen to help save the world.

“Evangelina’s Dream” is mainly an epilogue to “Sophie Zetyld.” Not much can be said without giving anything away, but the reader will be in for a trippy ride.

My thanks to Jasmine Shea Townsend for sending me an advance copy of this book in exchange for an honest review. All opinions are my own.

This collection of short stories is such a gem. It’s dreamy, diverse, and super eclectic, with varying topics and styles to guarantee pretty much everyone will find something to love in it. The synopsis above will give you a good idea of what to expect with some of these stories, so I want to focus on my favorite story in the collection, The Sea and the Stars.

Moonray, an introverted wallflower of a mermaid, ditches the chaos of the Spring Equinox celebration and finds herself in the company of a fallen star. This section is short, sweet, and overwhelmingly cute. It feels like the first chapter of a sweeping love story, and the end left me wanting a full novel about these two. (Seriously, please can I get a novel? These two are so adorable!)

One of this collection’s biggest strengths was the attention to representation, both in regards to race and sexual orientation. As the synopsis says, the author tackles Eurocentric beauty standards. The adaptation of Snow White definitely stands out in this regard; by changing the race of Snow White and inserting her into the household of a white queen/step mother, the dynamic between the two characters changes. Suddenly the queen’s antagonism feels more rooted in reality; the story now turns towards the queen’s sense of racial superiority. This made for a more compelling villain than a woman who hates a child simply because she is overcome with jealousy over her beauty.

Omega Star Genesis was another strong point. As you might guess from the name, this one fell on the science fiction side of things rather than fantasy. I always love stories which explores the nature of artificial intelligence, and this was a great example. The story also grapples with some of the complicated questions surrounding leadership, and the constant struggle to balance privacy with security and safety.

Overall, this collection was all over the place in the best possible way, with variation in topic, writing styles, and even genre. Every science fiction or fantasy fan will find something to love!