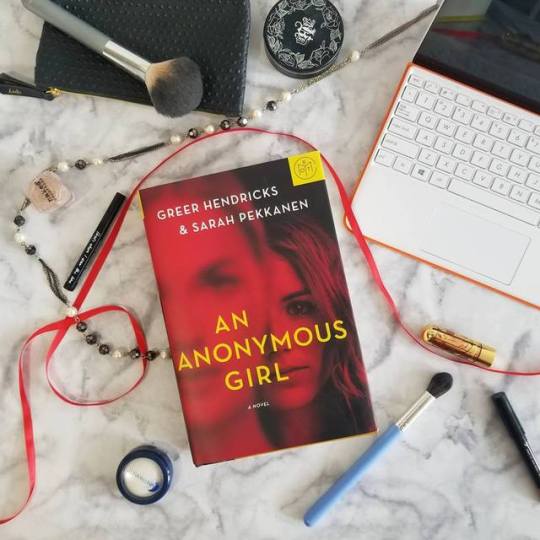 An Anonymous Girl
by Greer Hendricks and Sarah Pekkanen

The next novel of psychological suspense and obsession from the authors of the blockbuster bestseller The Wife Between Us.

Seeking women ages 18–32 to participate in a study on ethics and morality. Generous compensation. Anonymity guaranteed.

When Jessica Farris signs up for a psychology study conducted by the mysterious Dr. Shields, she thinks all she’ll have to do is answer a few questions, collect her money, and leave.

Question #1: Could you tell a lie without feeling guilt?

But as the questions grow more and more intense and invasive and the sessions become outings where Jess is told what to wear and how to act, she begins to feel as though Dr. Shields may know what she’s thinking… and what she’s hiding.

Question #2: Have you ever deeply hurt someone you care about?

As Jess’s paranoia grows, it becomes clear that she can no longer trust what in her life is real, and what is one of Dr. Shields’ manipulative experiments. Caught in a web of deceit and jealousy, Jess quickly learns that some obsessions can be deadly.

Question #3: Should a punishment always fit the crime?

From the authors of the blockbuster bestseller The Wife Between Us comes an electrifying new novel about doubt, passion, and just how much you can trust someone.

“In every lifetime, there are pivot points that shape and eventually cement one’s path.”

I was really hesitant to pick this up because I wasn’t crazy about The Wife Between Us, from the same authors, but I’m glad I gave into the hype. An Anonymous Girl is a fast paced and super fun and twisty thriller which follows the story of Jessica, a young and struggling 20-something makeup artist who worms her way into a psychological study after she hears they’re offering a suspiciously high compensation for participation. What does she have to lose?

The nature of the experiment is a bit foreboding from the very beginning. Jessica is prompted by a computer to respond to various questions about her personal history and sense of morality. Some of her more superficial answers are rejected as she is urged to dig deeper. Jessica’s answers hint at a dark secret in her past that the reader is not yet privy to. Meanwhile, her entanglement with the experiment and the psychologist in charge of it becomes more and more involved as the story progresses.

As with a lot of thrillers, it’s difficult to say much without giving away plot points which are best discovered organically. Suffice it to say that An Anonymous Girl has a healthy balance of foreshadowing and surprise, a protagonist who is flawed without being ridiculously unlikable, and a villain who, despite being just as over-the-top as one comes to expect in a thriller, has a believable backstory and motivation. An Anonymous Girl is a roller coaster ride that will keep you speeding through pages to the end.

“How do you know if you can really trust someone?” I finally ask.
“If you need to ask that question, then you probably already know the answer,” he says.

Thank you for reading! What was the last book that pleasantly surprised you? Let’s discuss in the comments!

The Wife Between Us
by Greer Hendricks & Sarah Pekkanen

A novel of suspense that explores the complexities of marriage and the dangerous truths we ignore in the name of love.

Discover the next blockbuster novel of suspense, and get ready for the read of your life.

Holy plot twist, Batman. This book was one twist after another, up until the very end, but a lot of the twists felt… underwhelming, particularly the one that comes at the very end. It added another dimension to the story that didn’t really add anything meaningful and tested the limits of my suspension of disbelief. The layers of deception in this book are seemingly endless.

This book is difficult to talk about without giving too much away; a lot depends on the reader going into the story knowing as little as possible and enjoying the plot twists as they unfold. This is one book that absolutely cannot survive spoilers. Suffice it to say that it vacillates between being a fun ride and throwing so many plots twists at the reader that half of them feel superfluous. The authors simply didn’t have sufficient time to develop all of the plot lines they tried to cram into this book. The end result feels a bit messy. Perhaps this is partially a product of two authors attempting to work together for the first time?

*Spoilers Ahead.* I’d like to explain in more detail why parts of this book fell flat for me; I don’t recommend proceeding unless you have already read the book.

The reader is meant to think that Vanessa is the ex wife and Nellie is her “replacement.” The first major twist was that Vanessa and Nellie are the same person, just before and after marriage to Richard. Nellie was a nickname Richard had for her. This was the twist that was most effective, in my opinion; I did not see this one coming. It was interesting and it made the reader look back on the passages they’ve already read in a new light. These things make for a good twist. Some reviewers thought the blurb made this twist too obvious; I’m inclined to agree, but I was lucky in that, due to long library hold times, I read the blurb and the book over a month apart, so it wasn’t fresh in my mind at the time.

However, a decent part of the “mystery” of this novel seems to be in unearthing what went wrong in Vanessa’s marriage with Richard. Anyone with even a rudimentary knowledge of signs of abuse will see the red flags very early on in the book. Richard is fiercely controlling, albeit sometimes in the guise of “taking care” of Vanessa. The most extreme example of this is when he purchases a house shortly before the wedding without ever consulting Vanessa about it. Flowers are nice surprises; houses are not. This was something that obviously should have been a joint decision and it shows Richard’s failure Vanessa as an autonomous person who may want to have some say in where she’ll be living.

Richard’s sister, Maureen, has a weird obsession with him, probably of the incestuous variety. Vanessa doesn’t seem to pick up on this until very late in the story, and I’m not sure why it was included at all.  Maybe it was meant to add to the “creep” factor of the story and help it live up to the “thriller” label, but it was so tangential to everything important to the actual plot that it felt very unnecessary and tacked on. I thought at one point they were trying to hint that Maureen was sabotaging Richard’s relationships out of jealousy, but Richard did a fine job of sabotaging those all on his own.

The final plot twist also felt superfluous to me. The revelation of Emma’s true identity was one twist too many and my suspension of disbelief snapped under the undue tension. The grudge she was holding and the things she was willing to do in order to get back at Vanessa felt completely out of proportion to Vanessa’s perceived “crime.” Sure, maybe Emma was simply meant to be a bit unbalanced, but Vanessa seems to be surrounded by unbalanced people; in the end, it feels like a lazy way of writing in some truly irrational behavior without having to bother to make it make sense.

The reviews on this book seem to be all over the place. Either you’ll love it to pieces or wonder if you’re really reading the same book everyone else seems to be raving about. Unfortunately, this one fell a bit flat for me. The intricate, tangled web the the authors were trying to weave for the reader just looked like… a mess.

Have you read The Wife Between Us? What were your thoughts? What’s the best thriller you’ve read lately?