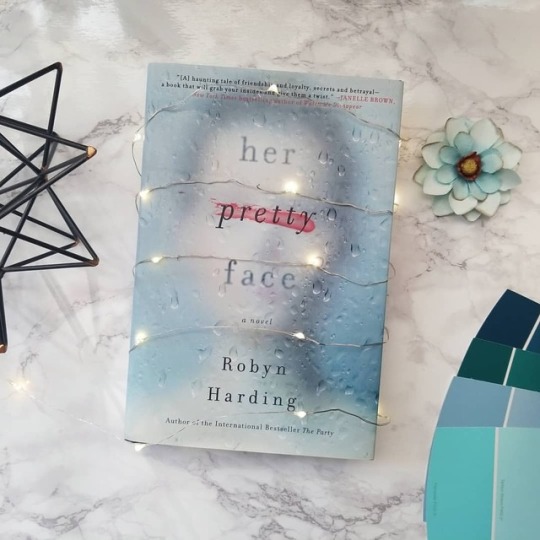 Her Pretty Face
by Robyn Harding

The author of the bestselling novel The Party—lauded as “tense and riveting” by New York Times bestselling author Megan Miranda—returns with a chilling new domestic drama about two women whose deep friendship is threatened by dark, long-buried secrets.

A stay-at-home mom whose troubled son is her full-time job, she thought that the day he got accepted into the elite Forrester Academy would be the day she started living her life. Overweight, insecure, and lonely, she is desperate to fit into Forrester’s world. But after a disturbing incident at the school leads the other children and their families to ostracize the Metcalfes, she feels more alone than ever before.

Until she meets Kate Randolph.

Kate is everything Frances is not: beautiful, wealthy, powerful, and confident. And for some reason, she’s not interested in being friends with any of the other Forrester moms—only Frances. As the two bond over their disdain of the Forrester snobs and the fierce love they have for their sons, a startling secret threatens to tear them apart…because one of these women is not who she seems. Her real name is Amber Kunick. And she’s a murderer.

In her masterful follow-up to The Party, Robyn Harding spins a web of lies, deceit, and betrayal, asking the question: Can people ever change? And even if they can, is it possible to forgive the past?

I received a free copy of this book through a GoodReads giveaway. All opinions are my own and are not influenced by the publisher.

**As you may know, I try to keep my reviews spoiler-free unless indicated otherwise. As a necessity of discussing certain aspects of the plot which impacted my enjoyment of the book, this review will contain more plot information than I generally like to include. No end-game plot twists will be revealed, but other minor spoilers do come into play here.**

Her Pretty Face is loosely based on events surrounding real-life serial killers Paul Bernardo and Karla Homolka. Amber Kunik (the character loosely based on Karla) pushes the blame for her role in a murder solely onto her boyfriend and partner in crime, Shane Nelson. After she obtains a plea deal based on her testimony, video evidence later shows her to be a much more willing participant in the torture and slaughter than she had claimed. Amber walks free after an unjustifiably short prison sentence.

The major part of the novel takes place years later, and Amber has taken on a new identity and gone into hiding. While it is obvious from the importance placed on the Amber Kunik case within the narrative that we will see Amber again, we are not told anything about her new identity.

The biggest strength in this novel lies in its characters. The central POV character is Frances, somewhat of a misfit mom and painfully insecure around the other mothers at her son’s school. Her son has emotional issues and has been ostracized by the other children as a result of his acting out. Frances, in turn, has been ostracized by the other moms. When Kate comes to her defense in front of the other moms, Frances latches onto her in a borderline unhealthy friendship. Frances is lonely and guilt-riddled by events in her past; while her constant insecurity was occasionally grating, I truly felt for Frances and she made for a good protagonist.

We also get to peek into the mind of Daisy, Kate’s teenage daughter. I understand why these chapters were included, as they relayed information crucial to the plot and foreshadowed upcoming twists. That being said, Daisy’s chapters were sometimes difficult for me to stomach. Daisy is bullied quite relentlessly by some of the other students, but can’t be bothered to defend herself because she’s to above it all. Daisy is too cool for their petty, childish high school drama, because Daisy is very Mature for Her Age and Not Like Other Girls. I do think she improves as a character later in the book, but good lord did I have some eye-rolling moment with Daisy.

Finally, there’s DJ, the younger brother of Amber Kunik’s murder victim, Courtney. DJ’s chapters are told in flashbacks to the 1990’s, when Courtney first went missing and the subsequent murder trials for Amber and Shane. DJ is around ten years old when his life is thrown into disarray by the death of his sister. He develops and obsession with Amber Kunik due to her lack of remorse and ability to fool everyone around her into viewing her as a victim.

The problem with this novel comes with the plot twists. There are two instances where Harding’s attempts at misdirection are really poorly executed. You can’t spend several chapters hinting relentlessly at something without the average mystery reader picking up on the fact that they need to look elsewhere. Harding’s giant neon arrows pointing at red herrings only had the effect of eliminating them as actual suspects. Had the clues pointing at these people been a bit more subtle, I’d have actually been more inclined to be misled.

Her Pretty Face is a novel you can absolutely enjoy if you’re not going into it hoping to be surprised. If solving the mystery before it’s actually revealed kills a book for you, this is probably not the right book for you.

Thank you for reading! If you’ve read Her Pretty Face, please share your thoughts in the comments!
Have you read any other novels based on real-life crimes?