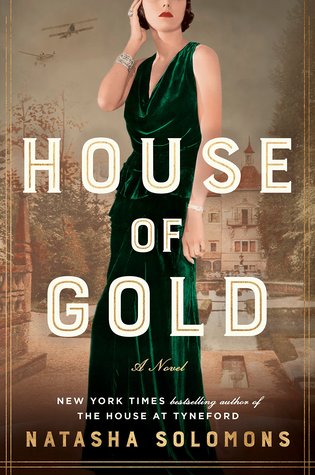 House of Gold
by Natasha Solomons

From the New York Times bestselling author of The House at Tyneford, an epic family saga about a headstrong Austrian heiress who will be forced to choose between the family she’s made and the family that made her at the outbreak of World War I.

Vienna, 1911. Twenty-one-year-old Greta Goldbaum has always hungered after what’s forbidden: secret university lectures, unseemly trumpet lessons, and most of all, the freedom to choose her life’s path.

The Goldbaum family has different expectations. United across Europe by unsurpassed wealth and power, Goldbaum men are bankers, while Goldbaum women marry Goldbaum men to produce Goldbaum children. Greta will do her part.

So Greta moves to England to wed Albert, a distant cousin. The marriage is not a success. Yet, when Albert’s mother gives Greta a garden, things at Temple Court begin to change. First Greta falls in love with her garden, then with England, and finally with her husband. But when World War I sends both Albert and Greta’s beloved brother, Otto, to the front lines–one to fight for the Allies, one to fight for the Central Powers–the House of Gold is left vulnerable as never before, and Greta must choose: the family she’s created or the one she was forced to leave behind.

Set against a nuanced portrait of World War I, this is a sweeping family saga rich in historical atmosphere and heartbreakingly human characters. House of Gold is Natasha Solomons’s most dazzling and moving novel yet.

My thanks to Netgalley and G.P. Putman’s Sons for sending me an ARC of this book in exchange for an honest review. All opinions are my own and are not influenced by the publisher.

House of Gold is a sweeping family drama that follows the fictional Goldbaum family in the years leading up to and during WWI. I read a lot of historical fiction, but I’ve read very little set in this particular time period, so I was excited to get into this book. Greta, a member of the Austrian branch of the Goldbaum family, is the main focus, although the novel does delve into the perspectives of other people in her life. The cast of characters was one of the main strengths of the novel, and it was a very character-driven narrative.

Greta is gregarious and free-spirited. She is getting ready to marry Albert, a distant cousin and a member of the English branch of the family when we join her story. (Goldbaum family tradition involves intermarrying to keep their vast wealth within the family.) Greta has never met Albert when her marriage with him is arranged by the family and feels extremely ambivalent about the pairing. She doesn’t want to marry a stranger but is afraid of going against her family’s wishes.

While I was very invested in Greta and her story, the pacing took away some of my enjoyment of this novel. The way Solomons dabbled into the stories of other relatives occasionally made the story feel somewhat unfocused. The aside about Greta’s cousin’s gambling debts, for example, did not add much to the story. (It did move the story forward as a plot point, but it was not necessary to go into his perspective to do this.) These sections really just felt like they bogged down the pace. We have no reason to care about this character as he is a relatively minor one, so his obviously impending breaking point doesn’t actually introduce any tension to the story.

Conversely, other parts of the story seem to be entirely skipped over. Greta is pregnant with her first child and the next thing I knew, she was in labor with her second. Aside from just skipping over a big chunk of time, it pains me to think of the character development that could have been explored in that time frame. Greta is young and a bit flighty when we meet her. She is deeply changed by the war and by motherhood, but we don’t get to see any of those changes happening; we simply skip over from young, newlywed Greta to Greta as a mother of two.

Greta’s brother Otto is also a major character, although he is largely separate from her throughout the story. His story largely focuses on the war and some very interesting power dynamics come into play in this context. The Goldbaum family is rich beyond measure, but also Jewish in a time of rising antisemitism. The concept of wealth countering relatively little social privilege as well as instances in which it cannot do so play a large role throughout the novel. Otto’s story, despite his wealthy background, is ultimately tragic.

Overall, I enjoyed House of Gold despite my misgivings about the pacing. I became very invested in some of the characters, I liked the importance of the family’s Jewish identity in the novel, and the family’s personal affairs were balanced well with what was happening on a worldwide scale. Readers who enjoy family dramas and historical fiction set during war time may find this a worthwhile read.

Thank you for reading! Have you read House of Gold? What were your thoughts?
What is your favorite time period to read about? Let’s discuss in the comments!