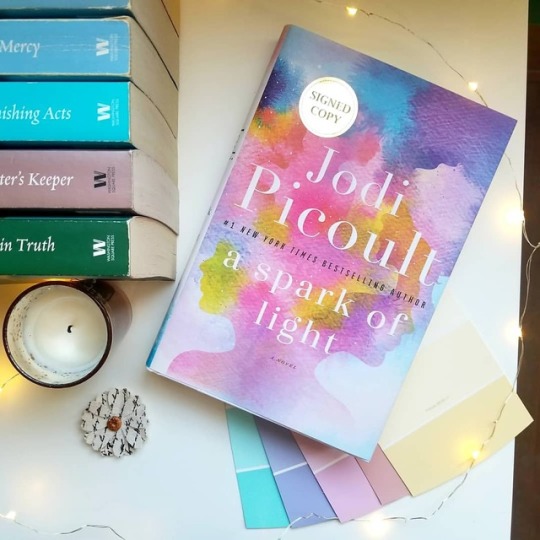 A Spark of Light
by Jodi Picoult

The warm fall day starts like any other at the Center—a women’s reproductive health services clinic—its staff offering care to anyone who passes through its doors. Then, in late morning, a desperate and distraught gunman bursts in and opens fire, taking all inside hostage.

After rushing to the scene, Hugh McElroy, a police hostage negotiator, sets up a perimeter and begins making a plan to communicate with the gunman. As his phone vibrates with incoming text messages he glances at it and, to his horror, finds out that his fifteen-year-old daughter, Wren, is inside the clinic.

But Wren is not alone. She will share the next and tensest few hours of her young life with a cast of unforgettable characters: A nurse who calms her own panic in order save the life of a wounded woman. A doctor who does his work not in spite of his faith but because of it, and who will find that faith tested as never before. A pro-life protester disguised as a patient, who now stands in the cross hairs of the same rage she herself has felt. A young woman who has come to terminate her pregnancy. And the disturbed individual himself, vowing to be heard.

Told in a daring and enthralling narrative structure that counts backward through the hours of the standoff, this is a story that traces its way back to what brought each of these very different individuals to the same place on this fateful day.

Jodi Picoult—one of the most fearless writers of our time—tackles a complicated issue in this gripping and nuanced novel. How do we balance the rights of pregnant women with the rights of the unborn they carry? What does it mean to be a good parent? A Spark of Light will inspire debate, conversation . . . and, hopefully, understanding.

Jodi Picoult was one of my favorite authors back in high school; I still vividly remember staying up late to read My Sister’s Keeper and crying my eyes out. As I’ve gotten older, I’ve started to find her books a bit too formulaic and found myself gravitating away from them. But there was so much hype around the release of A Spark of Light that I decided to check it out. Unfortunately, my experience with this book was rather underwhelming.

Let me start with the structure: the timeline is backwards. Why? Good question. It doesn’t feel like it adds anything substantial to the story. When Megan Miranda did this with All the Missing Girls, I didn’t care much for it then either, but at least it had the function of placing a big reveal late in the novel which happened chronologically early. I’m not sure what Picoult is going for with this other than trying to make it different for the sake of being different, but it just made it unnecessarily difficult to follow at times.

I liked that Picoult made a solid attempt at portraying varying viewpoints, although I think she fell a little flat in this regard. The writing seemed to suffer when she was portraying a viewpoint that wasn’t her own; consequently, some characters’ arguments fall rather flat and don’t always seem to ring true even in their own heads.

The father-daughter relationship was probably one of the biggest strengths of the novel. Hugh McElroy, the hostage negotiator, doesn’t realize his daughter Wren is inside the clinic when he first makes contact with the shooter. I think the uneasy and sometimes secretive nature of the relationship between a father and his teenage daughter will feel familiar to a lot of readers. Wren loves her father, but there are some things she could never tell him, and needing birth control goes at the top of that list.

Overall, though, I think the biggest drawback for me was that facts about abortion and musings about abortion rights took up what felt like a disproportionate amount of the book. It’s not that I have an issue with that subject matter; I read collections of essays about feminism on a semi-regular basis, so I obviously willingly encounter this topic often. Given what I gathered about the story from the blurb and the site of the hostage situation, I obviously expected these themes to come into play, but I did not expect them to overshadow the rest of the story. The events felt very secondary here, like a mere vehicle to insert rhetoric. Basically, it ended up not feeling much like a novel at all.

Thank you for reading! Have you read A Spark of Light or any of Jodi Picoult’s other work? Please share your thoughts in the comments!