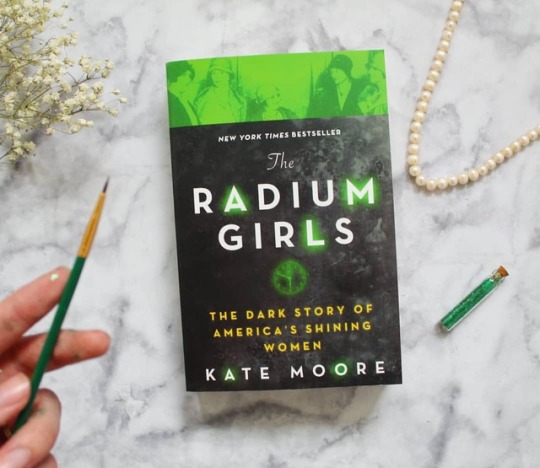 The Radium Girls
by Kate Moore

The Curies’ newly discovered element of radium makes gleaming headlines across the nation as the fresh face of beauty, and wonder drug of the medical community. From body lotion to tonic water, the popular new element shines bright in the otherwise dark years of the First World War.

Meanwhile, hundreds of girls toil amidst the glowing dust of the radium-dial factories. The glittering chemical covers their bodies from head to toe; they light up the night like industrious fireflies. With such a coveted job, these “shining girls” are the luckiest alive — until they begin to fall mysteriously ill.

But the factories that once offered golden opportunities are now ignoring all claims of the gruesome side effects, and the women’s cries of corruption. And as the fatal poison of the radium takes hold, the brave shining girls find themselves embroiled in one of the biggest scandals of America’s early 20th century, and in a groundbreaking battle for workers’ rights that will echo for centuries to come.

Written with a sparkling voice and breakneck pace, The Radium Girls fully illuminates the inspiring young women exposed to the “wonder” substance of radium, and their awe-inspiring strength in the face of almost impossible circumstances. Their courage and tenacity led to life-changing regulations, research into nuclear bombing, and ultimately saved hundreds of thousands of lives…

The Radium Girls sat unread on my shelf for a ridiculously long time before The Girly Book Club chose it for the June selection and finally gave me an excuse to move it up on my TBR. This was so incredibly difficult to read at times, but I don’t think the importance of this story can be overstated. What really struck me over and over throughout this book was the blatant disregard for (and at times the outright denial of) women’s pain.

The ladies employed by Radium Dial suffered, in addition to the physical health issues related to radium poisoning, what I can only characterize as psychological torture. They were mislead about the safety issues  surrounding their work by the grossly negligent management over a long period of time, resulting in the ongoing exposure and subsequent creeping health issues. Radium Dial then denied any wrongdoing, insisting for years on end that there was no such thing as  radium poisoning, despite the existing scientific literature at the time unequivocally stating otherwise. They used every possible tactic to deny any liability, from claiming that their health issues predated their employment to denying  that they had any health issues at all.

Kate Moore’s deep respect for these women truly shines through in her telling of their stories. She notes in the post-script that, in trying to research the Radium Girls, she was able to find existing books, but these tended to focus on the legal elements or the scientific elements of the events. While these are certainly present in Moore’s book and they are necessary and interesting, there is a clear focus on these women as, first and foremost, people who lived, breathed, had hopes and dreams, and were deeply wronged all in the name of profit.

The Radium Girls brings to light an important time in history which helped open the door for sweeping reform in regards to workers’ rights and safety. The book contains endless food for though on topics such as bodily autonomy, workers’ rights, and patients’ rights… and it’s a timely and necessary reminder of the need to value people over profits.

“And Grace Fryer was never forgotten. She is still remembered now—you are still remembering her now. As a dial-painter, she glowed gloriously from the radium powder; but as a woman, she shines through history with an even brighter glory: stronger than the bones that broke inside her body; more powerful than the radium that killed her or the company that shamelessly lied through its teeth; living longer than she ever did on earth, because she now lives on in the hearts and memories of those who know her only from her story.

Grace Fryer: the girl who fought on when all hope seemed gone; the woman who stood up for what was right, even as her world fell apart. Grace Fryer, who inspired so many to stand up for themselves.”