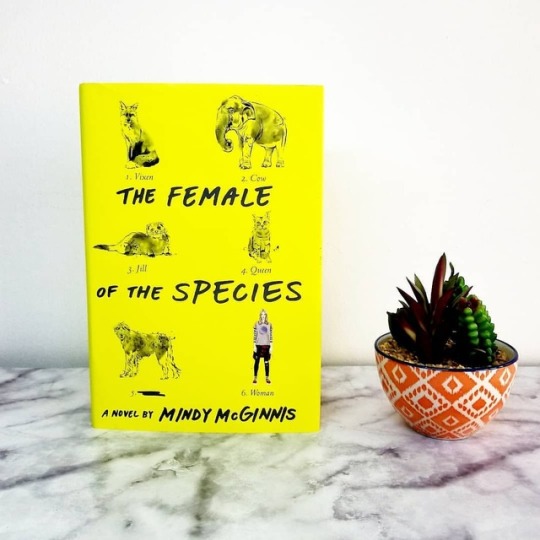 The Female of the Species
by Mindy McGinnis

A contemporary YA novel that examines rape culture through alternating perspectives.

Alex Craft knows how to kill someone. And she doesn’t feel bad about it.

Three years ago, when her older sister, Anna, was murdered and the killer walked free, Alex uncaged the language she knows best—the language of violence. While her own crime goes unpunished, Alex knows she can’t be trusted among other people. Not with Jack, the star athlete who wants to really know her but still feels guilty over the role he played the night Anna’s body was discovered. And not with Peekay, the preacher’s kid with a defiant streak who befriends Alex while they volunteer at an animal shelter. Not anyone.

As their senior year unfolds, Alex’s darker nature breaks out, setting these three teens on a collision course that will change their lives forever.

But boys will be boys, our favorite phrase that excuses so many things, while the only thing we have for the opposite gender is women, said with disdain and punctuated with an eye roll.

Alex Craft is filled with righteous anger in a way we don’t see in a lot of female protagonists. Another blogger suggested The Female of the Species to me after I reviewed Sadie, by Courtney Summers, and talked about how much I appreciated the way Sadie’s justified anger was portrayed in the narrative. Alex bears some similarities to Sadie; the violent death of a sister has triggered something dark in both girls.

I think McGinnis felt the need to include these other POV characters in part create breaks from Alex’s somewhat flat emotional state. The drama between the preacher’s daughter, the cheerleader, and jealousy over boys creates for a very different tone from Alex’s chapters, which are (for the most part) dominated by frustration over what happened to her sister and countless other girls and women and a thirst for vengeance. (I think Courtney Summers’ novel, Sadie, proved that one can devote a lot of time to a character like that and still make for a really interesting novel, but I don’t want to beat this book to death with comparisons to Sadie.)

For me, Alex’s chapters were the most engaging, with the rest of the characters falling too cleanly into stereotypes for me to really connect. Alex is the primary reason for my four star rating. Alex’s emotional journey was very well written, from memories of her childhood that hinted at a dark side to her even before her sister’s death, to the simmering rage of much of her life, and finally to a hint at a possibility of healing when she begins to learn to let others in. (Don’t worry, this isn’t one of those “teen romance can heal all wounds” books. Alex gets a boyfriend, yes, but her friendship with Peekay is also a huge turning point for her.)

I won’t get into spoilers, but I will say I wasn’t the biggest fan of how  McGinnis wrapped up the ending. It felt to me like she went for something dramatic and final simply because she didn’t know where else to leave off with this story. McGinnis ends the story with a bang when I feel like the subject matter might have been better served by a bit more subtlety.

Thank you for reading! Have you read The Female of the Species? Please share your thoughts in the comments!