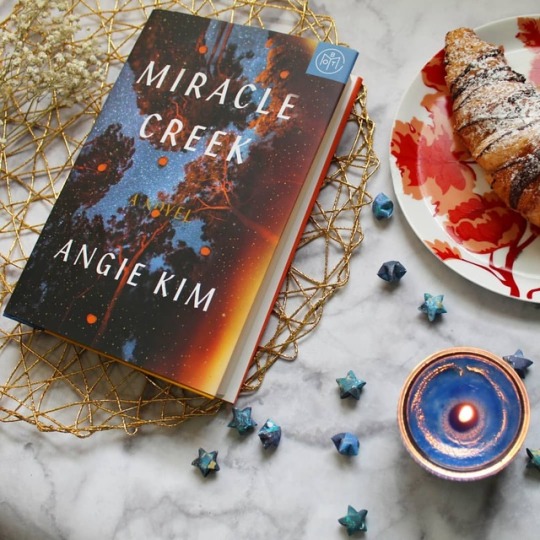 My husband asked me to lie. Not a big lie. He probably didn’t even consider it a lie, and neither did I, at first . . .

In the small town of Miracle Creek, Virginia, Young and Pak Yoo run an experimental medical treatment device known as the Miracle Submarine—a pressurized oxygen chamber that patients enter for therapeutic “dives” with the hopes of curing issues like autism or infertility. But when the Miracle Submarine mysteriously explodes, killing two people, a dramatic murder trial upends the Yoos’ small community.

Who or what caused the explosion? Was it the mother of one of the patients, who claimed to be sick that day but was smoking down by the creek? Or was it Young and Pak themselves, hoping to cash in on a big insurance payment and send their daughter to college? The ensuing trial uncovers unimaginable secrets from that night—trysts in the woods, mysterious notes, child-abuse charges—as well as tense rivalries and alliances among a group of people driven to extraordinary degrees of desperation and sacrifice.

Angie Kim’s Miracle Creek is a thoroughly contemporary take on the courtroom drama, drawing on the author’s own life as a Korean immigrant, former trial lawyer, and mother of a real-life “submarine” patient. An addictive debut novel for fans of Liane Moriarty and Celeste Ng, Miracle Creek is both a twisty page-turner and a deeply moving story about the way inconsequential lies and secrets can add up—with tragic consequences.

Miracle Creek is the best kind of mystery novel in the sense that it is so much more then just a puzzle to solve. The story is filled with fleshed-out, complicated, morally gray characters and loads of food for thought. As you can tell from the synopsis, the parenting of disabled children is a major theme of the story, particularly in regards to autism.

Elizabeth, the mother of Henry (the boy whose death provides the focal point of the trial), is hyper-fixated on her son’s autism, to a nearly obsessive degree. This opens the door to explore the “hierarchy” of disability among parents of disabled children. Henry was relatively high-functioning compared to a lot of the patients at Miracle Submarine, and there’s a sense that many of the other parents, particularly those with children who would likely never be independent, were skeptical of Elizabeth. Was her obsession with making Henry fit into a socially acceptable box more harmful to him than his autism could ever be?

I love books that aren’t afraid to face the darker side of human nature, even when it comes to relationships which we value overall. Kim wrestles with the frustrations of parenting and the fleeting thoughts that are, if we’re being honest, are totally normal… but too awful and shameful to voice aloud. I’m not a parent myself, but I think we’ve all had moments of frustration where we’ve wished a loved one would disappear. And we all know how devastating it would be if it actually came to pass. Miracle Creek brings this scenario front and center.

Another theme which worked really well in this novel was that of an immigrant’s experience in America. The Yoo family moved to the US from Korea, primarily to provide greater opportunities for their daughter, Mary. Kim explores Mary’s struggles to adjust in a new country and the way those struggles differ from those of her parents beautifully. Each member of the family is experiencing a sense of isolation in their own way, and the difficult transition, combined with the tragedy of the explosion, drives a wedge between all of them.

Finally, I was so interested to learn that the author, Kim, is a former lawyer. The trial plays such a huge role in the novel, and those scenes were all so engrossing. It’s not surprising that Kim’s personal expertise helped to bring the courtroom to life.

In looking over other reviews, I noticed some of the lower ratings pointing out that the disabled children in the novel never get much focus. None of them are point of view characters, and they don’t feel particularly developed as people. I think this is fair, but I also think that was kind of the point, especially when it comes to Henry. Elizabeth had a hard time viewing her son as a person rather than simply some embodiment of autism. Part of the tragedy of the story seems, to me, that she missed out on ever really knowing her own child because she was so fixated on his diagnosis. We never learn much about Henry in the course of the story. Sadly, it feels like none of the people around him ever did, either.

Thank you for reading! Have you read Miracle Creek? Please share your thoughts in the comments!