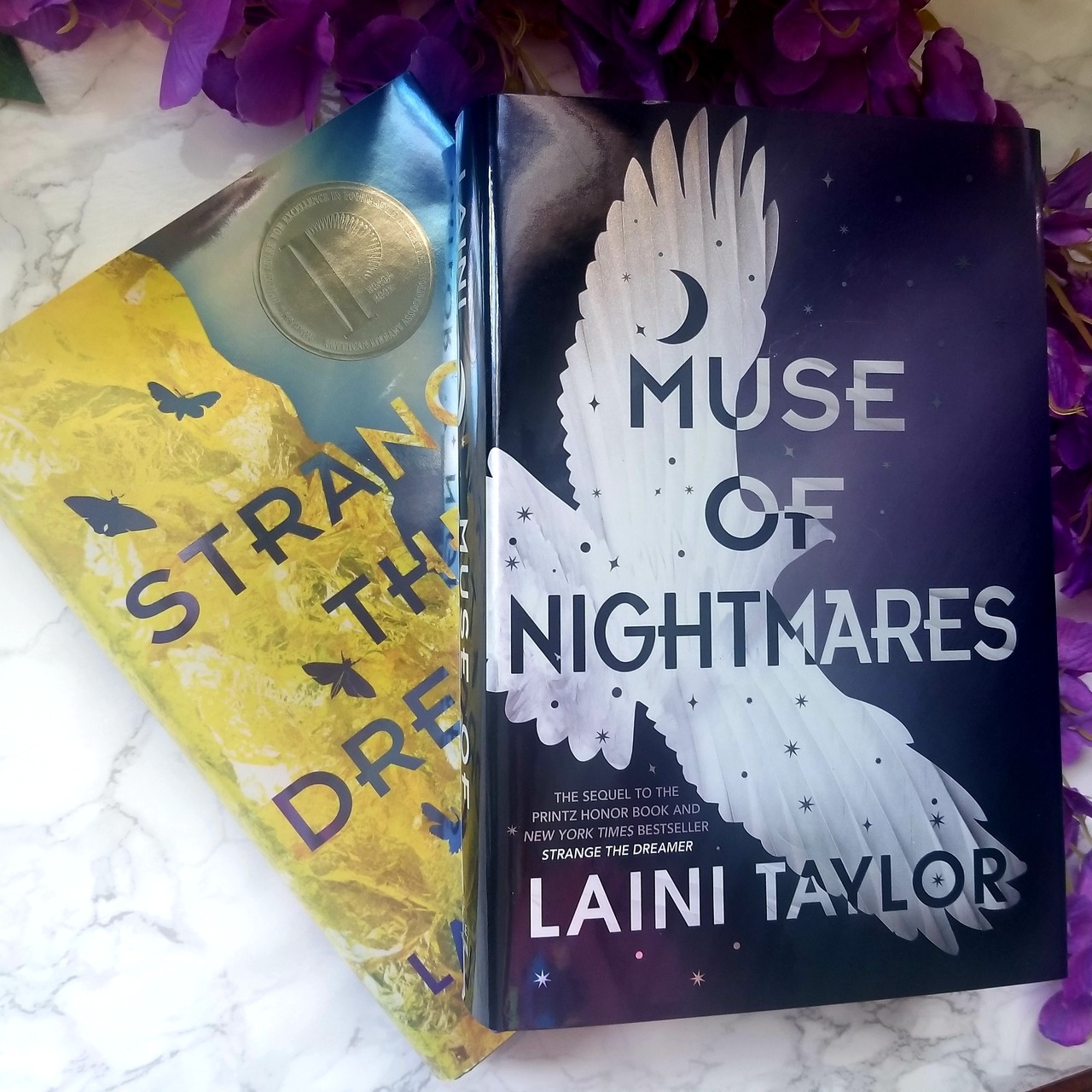 Muse of Nightmares
by Laini Taylor

In the wake of tragedy, neither Lazlo nor Sarai are who they were before. One a god, the other a ghost, they struggle to grasp the new boundaries of their selves as dark-minded Minya holds them hostage, intent on vengeance against Weep.

Lazlo faces an unthinkable choice—save the woman he loves, or everyone else?—while Sarai feels more helpless than ever. But is she? Sometimes, only the direst need can teach us our own depths, and Sarai, the muse of nightmares, has not yet discovered what she’s capable of.

As humans and godspawn reel in the aftermath of the citadel’s near fall, a new foe shatters their fragile hopes, and the mysteries of the Mesarthim are resurrected: Where did the gods come from, and why? What was done with thousands of children born in the citadel nursery? And most important of all, as forgotten doors are opened and new worlds revealed: Must heroes always slay monsters, or is it possible to save them instead?

Love and hate, revenge and redemption, destruction and salvation all clash in this gorgeous sequel to the New York Timesbestseller, Strange the Dreamer.

“Once upon a time there was a silence that dreamed of becoming a song, and then I found you, and now everything is music.”

Reading a highly anticipated sequel is a somewhat scary prospect, in a way. Will it live up to the first book or will it ruin the series for you? Laini Taylor delivers a worthy followup to Strange the Dreamer with Muse of Nightmares. Taylor has the rare talent of crafting a story which hinges on some extremely dark themes (including but not limited to rape, slavery, and the murder of children) without the overall tale feeling overwhelmingly dark. Strange the Dreamer and Muse of Nightmares are both imbued with a magical sense of light and hope.

Taylor introduces two new major characters in Muse of Nightmares, Kora and Nova, which makes the story feel fresh. It’s difficult to say much about this aspect of the story without getting into spoilers, but suffice it to say that the two are sisters with a deep, unbreakable bond. Like many characters in the world of Strange the Dreamer, their lives were thrown into turmoil by Skathis.

Arguably the most interesting character in this installment is Minya, however. Strange the Dreamer left us with a somewhat one dimensional image of the vengeance-driven little girl. This book introduces more nuance to her character and explores how the responsibilities of caring for the other godspawn as a child herself and in the wake of a hugely traumatic event has warped her emotions. Strange the Dreamer shows Minya has wrathful, perhaps irredeemable; Muse of Nightmares asks us to sympathize with her. Minya has some of the best character development in the duology in this book.

As in Strange the Dreamer, the world building in this novel is enchanting and immersive. The last page will leave you wishing to spend more time in this magical universe of Taylor’s creation.

Thank you for reading! Have you read Muse of Nightmares? Please feel free to share your thoughts in the comments!