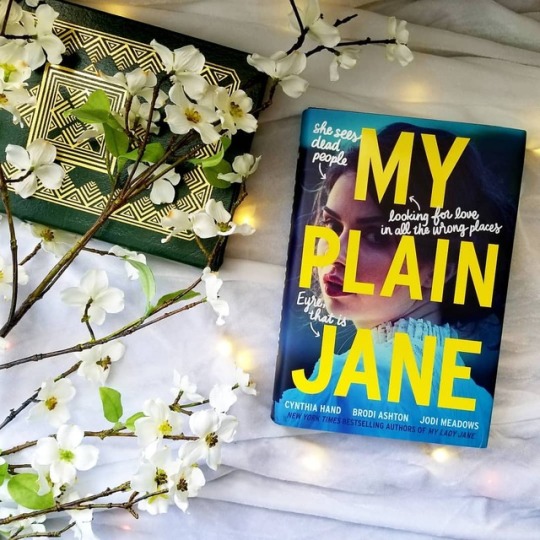 You may think you know the story. After a miserable childhood, penniless orphan Jane Eyre embarks on a new life as a governess at Thornfield Hall. There, she meets one dark, brooding Mr. Rochester. Despite their significant age gap (!) and his uneven temper (!!), they fall in love—and, Reader, she marries him. (!!!)

Prepare for an adventure of Gothic proportions, in which all is not as it seems, a certain gentleman is hiding more than skeletons in his closets, and one orphan Jane Eyre, aspiring author Charlotte Brontë, and supernatural investigator Alexander Blackwood are about to be drawn together on the most epic ghost hunt this side of Wuthering Heights.

Let me preface this by saying that I thought My Lady Jane was loads of fun, and I went into this book with high hopes. My Plain Jane, like the prior installment of “The Lady Janies,” relies heavily on the reader connecting with the humor of the narrators. While My Lady Jane was good for more than a few chuckles, My Plain Jane fell rather flat. I was left with the overall impression that it was simply too ridiculous, which is really saying something, considering the prior book had a main character who frequently transformed into a horse.

But aside from the issues with the humor, I think I failed to connect with this book because the titular character simply did not feel like Jane Eyre to me. The narrators’ Jane is boy-crazy, unambitious, and bland. Her ability to see spirits should have been an easy route to make her more interesting, but her character simply never clicked with me. On a similar note, I was never cared much for Mr. Rochester in the original source material, but if you were, be forewarned that you will not be a fan of his characterization in this retelling. Despite Jane’s doe-eyed adoration, Mr. Rochester is not presented in flattering terms, to say the least.

Charlotte Brontë herself has also been inserted into the narrative; she was at Lowood with Jane and follows her after she leaves. She considers Jane to be her very best friend, and she is (of course) writing a novel with a protagonist inspired by Jane. The problem with the insertion of Charlotte is that she draws the focus away from Jane in a big way. While Charlotte is deeply attached to Jane, her story is also largely dominated by a desire to work with The Society (essentially, to become a ghost hunter) and a love interest. Jane has become almost a secondary character in the retelling of her own story. This is not necessarily a problem, but the plot lines pushing Jane out of the story must be sufficiently interesting to justify it. They were… not.

Perhaps My Lady Jane was too tough an act to follow. It was a weird, hilarious delight. My Plain Jane unfortunately fell short in comparison. I’m still curious to see what comes next in The Lady Janies series, but I’d recommend skipping this installment.

Thank you for reading! Have you read or watched anything based on a classic novel lately? What did you think? Let’s discuss in the comments!