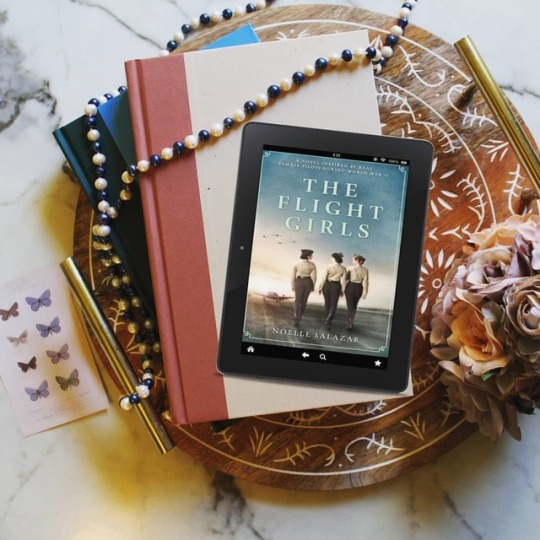 The Flight Girls
by Noelle Salazar

1941. Audrey Coltrane has always wanted to fly. It’s why she implored her father to teach her at the little airfield back home in Texas. It’s why she signed up to train military pilots in Hawaii when the war in Europe began. And it’s why she insists she is not interested in any dream-derailing romantic involvements, even with the disarming Lieutenant James Hart, who fast becomes a friend as treasured as the women she flies with. Then one fateful day, she gets caught in the air over Pearl Harbor just as the bombs begin to fall, and suddenly, nowhere feels safe.

To make everything she’s lost count for something, Audrey joins the Women Airforce Service Pilots program. The bonds she forms with her fellow pilots reignite a spark of hope in the face war, and—when James goes missing in action—give Audrey the strength to cross the front lines and fight not only for her country, but for the love she holds so dear.

Shining a light on a little-known piece of history, The Flight Girls is a sweeping portrayal of women’s fearlessness, love, and the power of friendship to make us soar.

My thanks to NetGalley and MIRA for sending me an advance copy of this book in exchange for an honest review. All opinions are my own and are not influenced by the publisher.

I’ll start this out by freely admitting that I seem to be in the minority opinion on this one. I read a lot of rave reviews and went in with super high hopes, ready for a WWII story with a lot of substance and a strong, interesting female protagonist. What I got felt more… fluffy romance set against a dark backdrop.

The book definitely plays lip service to the idea of a strong female lead, but it doesn’t really feel like it goes beyond that. Audrey is not like other girls because she likes to fly planes and doesn’t want to get married and have babies. The only reason she doesn’t want to get married and have babies, by the way, seems to be because it’d be nearly impossible to find a husband who would “allow” her to keep flying. I think this really gets at the heart of my issue with Audrey: that her love of flight really felt like her singular defining character trait. She never starting feeling like a person to me. I love that she had an unconventional passion for a woman of the time, but that’s not enough on its own to make her an interesting character.

Another reviewer on Goodreads also pointed out some anachronisms in the novel. This truly isn’t something that bothers me as a reader (barring something ridiculous like if Audrey were to suddenly pull out a flip phone) but for readers who are super into the accuracy of their history, it’s bound to ruffle some feathers.

The romance, while it took up a bigger part of the story than I would have liked, was fine. I liked that Audrey found someone who shared her passion and there seemed to be a huge amount of respect between the two of them, especially considering the normal power dynamics of a relationship in the time period. This felt healthy and sweet, if a bit predictable (although what romance isn’t?) My only real qualm with the romance aspect of the book was that I’m not a huge fan of the basic concept of the story, which was: “girl who adamantly never wants to get married discovers she just hasn’t met the right man yet!” I think The Flight Girls will appeal to romance fans far more than historical fiction fans, which seems odd given the premise and marketing of the book.

The Flight Girls is a story with a lot of potential that, while it missed the mark for me personally, seems to be a huge hit with a lot of readers. Pick this up if you’re in the mood a light read, but don’t expect hard-hitting historical fiction that makes you think. This is Noelle Salazar’s debut novel, and I do think she has tons of potential. I’m excited to see what she writes next!