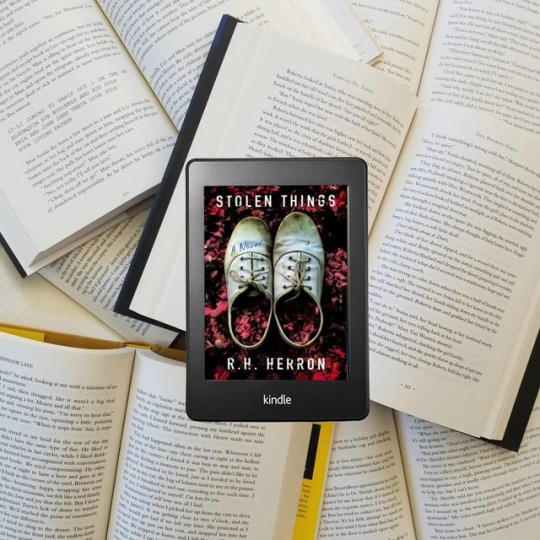 A sensational crime, a missing teen, and a mother and daughter with no one to trust but themselves come together in this shocking debut thriller by R. H. Herron.

Laurie Ahmadi has worked as a 911 police dispatcher in her quiet Northern California town for nearly two decades. She considers the department her family; her husband, Omid, is its first Arab American chief, and their teenaged daughter, Jojo, has grown up with the force. So when Laurie catches a 911 call and, to her horror, it’s Jojo, the whole department springs into action.

Jojo, drugged, disoriented, and in pain, doesn’t remember how she ended up at the home of Kevin Leeds, a pro football player famous for his on-the-field activism and his work with the CapB—“Citizens Against Police Brutality”—movement. She doesn’t know what happened to Kevin’s friend and trainer, whose beaten corpse is also discovered in the house. And she has no idea where her best friend Harper, who was with her earlier in the evening, could be.

But when Jojo begins to dive into Harper’s social media to look for clues to her whereabouts, Jojo uncovers a shocking secret that turns everything she knew about Harper—and the police department—on its head. With everything they thought they could rely on in question, Laurie and Jojo begin to realize that they can’t trust anyone to find Harper except themselves . . . and time is running out.

My thanks to NetGalley and Dutton for sending me an advance copy of this book in exchange for an honest review. All opinions are my own and are not influenced by the publisher.

This book was a bit of a mixed bag for me. It’s compulsively readable and fast-paced, but the twist at the end is a bit much to swallow. I loved the alternating perspectives. “Mom who is practically married to her job” alternating with “teen daughter who the mother doesn’t know half as well as she thinks” is a little overdone in the genre at this point, but I thought it worked really well here.

There is a wide divide between the two POV characters, not just for typical “angsty teens are unreachable” reasons, but because Jojo is at a point in her life where she’s figuring out her own politics and value system, and they don’t align with those of her parents. Mystery/thriller novels are best, in my opinion, when they’re not driven solely by the mystery; Stolen Things has lots of interesting relationship dynamics to keep the story interesting.

One of the predominant themes of the book is police brutality, and that is part of what’s driving a wedge between Jojo and her parents, who both work in law enforcement (her father as a police chief and her mother, a former police officer as a 911 dispatcher). Also prominent in the story is an exploration of rape culture and victim blaming. While including social issues like these in a story can be admirable, I’m not sure that a fast-paced thriller is really up to the task of treating these topics with the gravity that would be necessary for them to feel like a natural part of the story. While the book is not categorized as Young Adult and is a bit too dark to fit into the genre, some of the passages which centered on social issues had a very YA feel to them.

Overall, this was definitely a page turner, but some sections felt awkward and fell flat. Stolen Things was worth a read and may be a great choice for fans of authors like Mary Kubica and Megan Miranda.