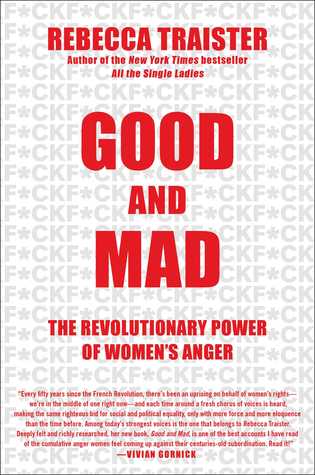 Good and Mad: The Revolutionary Power of Women’s Anger
by Rebecca Traister

From Rebecca Traister, the New York Times bestselling author of All the Single Ladies comes a vital, incisive exploration into the transformative power of female anger and its ability to transcend into a political movement.

In the year 2018, it seems as if women’s anger has suddenly erupted into the public conversation. But long before Pantsuit Nation, before the Women’s March, and before the #MeToo movement, women’s anger was not only politically catalytic—but politically problematic. The story of female fury and its cultural significance demonstrates the long history of bitter resentment that has enshrouded women’s slow rise to political power in America, as well as the ways that anger is received when it comes from women as opposed to when it comes from men.

With eloquence and fervor, Rebecca tracks the history of female anger as political fuel—from suffragettes marching on the White House to office workers vacating their buildings after Clarence Thomas was confirmed to the Supreme Court. Here Traister explores women’s anger at both men and other women; anger between ideological allies and foes; the varied ways anger is perceived based on its owner; as well as the history of caricaturing and delegitimizing female anger; and the way women’s collective fury has become transformative political fuel—as is most certainly occurring today. She deconstructs society’s (and the media’s) condemnation of female emotion (notably, rage) and the impact of their resulting repercussions.

Highlighting a double standard perpetuated against women by all sexes, and its disastrous, stultifying effect, Traister’s latest is timely and crucial. It offers a glimpse into the galvanizing force of women’s collective anger, which, when harnessed, can change history.

On some level, if not intellectual then animal, there has always been an understanding of the power of women’s anger:that as an oppressed majority in the United States, women have long had within them the potential to rise up in fury, to take over a country in which they’ve never really been offered their fair or representative stake. Perhaps the reason that women’s anger is so broadly denigrated–treated as so ugly, so alienating, and so irrational–is because we have known all along that with it came the explosive power to upturn the very systems that have sought to contain it.

This book came onto my radar when the author, Rebecca Traister, appeared on The Daily Show this past November. I’ll embed it here, because I feel like the author does  a much better job of introducing her book than I can.

If I had to sum up this book in as few words as possible, I’d have to say “realistic yet optimistic.” Good and Mad seems to be equally devoted to outlining the struggles of women and as well as the historical and contemporary triumphs. The underlying message is that it’s daunting to try to enact change when the deck is stacked against you, and success is never guaranteed, but history has shown us over and over that it is possible.

Traister’s attention to intersectionality is very thorough, and she makes a point of outlining how race impacts how women experience sexism in varying circumstances throughout the book. This aspect of her writing feels particularly important when she is addressing large-scale protest movements. The 2016 election saw a large surge of white women with no prior experience in protest suddenly scrambling for a way to make our voices heard.

This is a positive thing, but we must also keep in mind that, for the black women who have been embroiled in social justice movements for years, they’re seeing a lot of people who are late to the party. (And before anyone tries to come after me in the comments, no, I’m not implying no white woman attended a protest prior to 2016. I’m a white woman and I protested prior to 2016. The point here has to do with overall trends.) It’s amazing to see so many people inspired to become politically involved, but we must be mindful and look to those with actual experience for leadership.

Reading this book in the current political climate is kind of weirdly cathartic. Traister’s points are so well articulated, heartfelt, and unbelievably timely. I cannot recommend it strongly enough.

Thank you for reading! Have you read Good and Mad? Please share your thoughts in the comments.
What are your GoodReads reading goals this year? Let’s discuss!