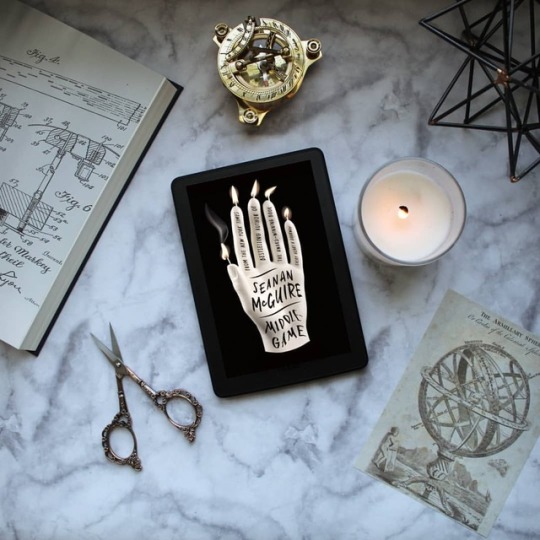 Meet Roger. Skilled with words, languages come easily to him. He instinctively understands how the world works through the power of story.

Meet Dodger, his twin. Numbers are her world, her obsession, her everything. All she understands, she does so through the power of math.

Meet Reed, skilled in the alchemical arts like his progenitor before him. Reed created Dodger and her brother. He’s not their father. Not quite. But he has a plan: to raise the twins to the highest power, to ascend with them and claim their authority as his own.

My thanks to NetGalley and Tor.com for sending me an ARC of this book in exchange for an honest review. All opinions are my own and are not influenced by the publisher.

Middlegame is a deliciously dark and fun adult fantasy novel. Imagine one day finding out there was more than a grain of truth in the fairy tales you grew up reading. Roger and Dodger grew up in a world where a series of books about the “Up-and-Under,” written by Asphodel Baker, were hiding alchemical truths under a thin layer of fantasy. These two almost-twins find out that there is a lot more to the world and to themselves than they ever imagined.

While the story itself is a lot of fun (full of psychic links, time travel, and danger), the absolute high point of this book for me was exploring the relationship between Roger and Dodger. They meet for the first time in their own heads, with a seven-year-old Roger trying to convince himself that the girl’s voice in his head is just a new imaginary friend he’s dreamed up. Except… she knows things he doesn’t, mainly how to do the math homework he’s been totally failing to comprehend.

Roger and Dodger are polar opposites in a lot of ways; Roger lives for books and words, and Dodger lives for the straight-forward world of math. But they’re also two sides of the same coin, with their weird ability to see into each other’s minds and a strange sense of not truly belonging. They love one another fiercely and their bond really jumps off the page.

If I have any complaint about this book, it’s that the pacing can feel a bit off at times. At over 500 pages, it is a bit long, but for the most part is very engrossing. Given the sheer size of the book, it also seems odd that the rules of the universe don’t feel entirely pinned down, although perhaps this will vary from reader to reader, as I’m only passably familiar with a lot of the things McGuire employs in this book, like the Doctrine of Ethos, alchemy, and other vaguely magical concepts.

Middlegame is a highly ambitious novel and a perfect choice for those of us who like our books a bit on the weird side. Great for fans of books like The Seven 1/2 Deaths of Evelyn Hardcastle (Stuart Turton), The Rithmatist (Brandon Sanderson), and Dark Matter (Blake Crouch).

Thank you for reading! This was my first Seanan McGuire book and I’ll definitely be checking out more of her work. Tell me about an author you’ve recently discovered in the comments!