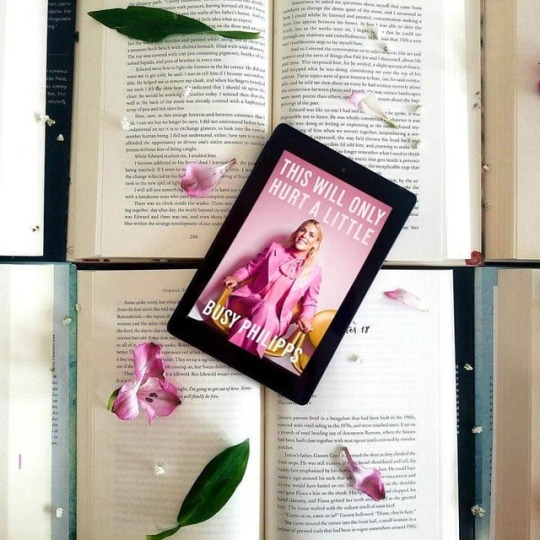 This Will Only Hurt a Little
by Busy Philipps

A memoir by the beloved comedic actress known for her roles on Freaks and Geeks, Dawson’s Creek, and Cougar Town who has become “the breakout star on Instagram stories…imagine I Love Lucy mixed with a modern lifestyle guru” (The New Yorker).

Busy Philipps’s autobiographical book offers the same unfiltered and candid storytelling that her Instagram followers have come to know and love, from growing up in Scottsdale, Arizona and her painful and painfully funny teen years, to her life as a working actress, mother, and famous best friend.

Busy is the rare entertainer whose impressive arsenal of talents as an actress is equally matched by her storytelling ability, sense of humor, and sharp observations about life, love, and motherhood. Her conversational writing reminds us what we love about her on screens large and small. From film to television to Instagram, Busy delightfully showcases her wry humor and her willingness to bare it all.

I’ve been waiting my whole life to write this book. I’m just so grateful someone asked. Otherwise, what was the point of any of it?

“I’ve determined that just about everyone feels left out; it just comes down to how you handle it. I haven’t handled it the best, historically speaking. And truthfully, isn’t there something incredible about the fact that we all feel left out? Shouldn’t that somehow make us all feel a little less alone?”

This Will Only Hurt a Little is unpolished, but surprisingly heartfelt and raw. This celebrity memoir reads like Busy Philipps herself is recounting her life for you over a few glasses of wine; the tone is casual, humorous, and occasionally brimming with emotion.

I think the biggest drawback for this memoir is that it sometimes feels like Busy is trying too hard to be #relatable, emphasizing often how much she felt like an outsider in Hollywood. Sure, she’s a wealthy celebrity, but she’s no Angelina Jolie, so she’s practically one of us little people, am I right? Honestly, I’m not faulting her for this as a person; the desire to connect and be understood is universal, and Busy is in this rare in-between state of being a celeb without ever really “making it” that makes her feel alienated from both the A-list celebrities and from average people. I get it. But the fact is her struggles are not relatable to the vast majority of people. That’s part of what makes her interesting. So just own that.

Regardless, I enjoyed this memoir a lot overall. Busy’s sense of humor shines through in every chapter, but she also gets almost painfully personal at times. It was revealed shortly before the memoir came out, but it bears repeating here in case anyone needs the trigger warning: Busy details the rape she suffered as a young teen and the ways she struggled to process it in the aftermath. She didn’t view it as rape at the time and still seems to struggle to do so. We’ve all heard those “grey area” assault stories where the victim rationalizes what happened, thinking that if perhaps they had been more clear or forceful in their protestations, things would have gone differently.

Busy was unable to view what happened to her as rape. What followed was a long bout of promiscuity and a struggle to reconnect with her sense of self worth. This story, while surely painful for Busy to share, is one of the biggest strengths of her memoir, and stands in stark contrast to her struggles in Hollywood. Busy’s voice felt authentic and raw, and there are surely a lot of girls and women out there with similar stories who will be made to feel less alone by hearing her story.

Thank you for reading! Have you read any celebrity memoirs? Discuss your favorites in the comments!